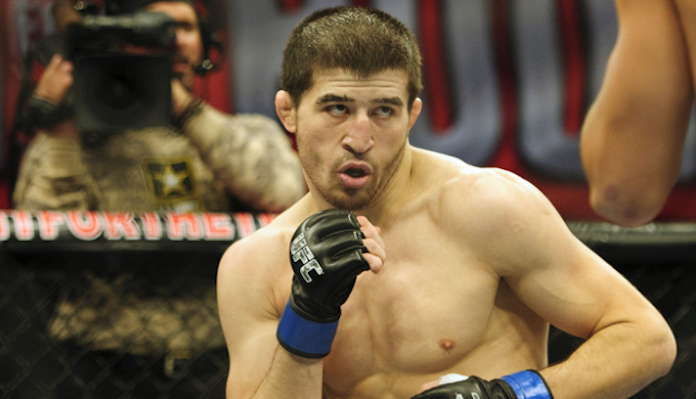 ESPN’s Ariel Helwani broke word that Khabilov signed with Bellator, noting that Khabilov fought out his contract with the UFC which allowed him to leave the promotion.

Former UFC stalwart Rustam Khabilov (24-4) has signed a multi-fight deal with Bellator, per sources. He has won seven of eight and recently fought out his contract with the UFC, last appearing in November.

Former UFC stalwart Rustam Khabilov (24-4) has signed a multi-fight deal with Bellator, per sources. He has won seven of eight and recently fought out his contract with the UFC, last appearing in November.

Khabilov (24-4) fought for the UFC between 2012 and 2019, racking up a 10-3 record in the Octagon with notable wins over Masvidal, Yancy Medeiros, and Norman Parke, to name a few. He also lost to Benson Henderson, Adriano Martins, and Carlos Diego Ferreira in the Octagon. Prior to fighting out his contract with the UFC, Khabilov had won seven of his last eight fights including a decision win over Sergey Khandozhko in his last fight for the UFC.

At one point in time, the 33-year-old Russian Khabilov was ranked as one of the top lightweights in the UFC, but for whatever reason, the promotion’s matchmakers really soured on him and stopped giving him high-level opposition. Between 2016 and 2018, Khabilov racked up six straight wins but they were all over unranked fighters. He also missed weight twice, which likely led to the UFC matchmakers losing their faith in him.

In Bellator, Khabilov could fight at either lightweight or welterweight. He proved in his wins over fighters like Masvidal that he is a quality fighter, but too often was he content with winning decisions, which is not what a promoter wants to see. If Khabilov is looking to make a run in Bellator hopefully he can start going back to finishing his opponents and showing to the MMA community that he is still a quality fighter and title contender.

How do you think Rustam Khabilov will fare in Bellator?