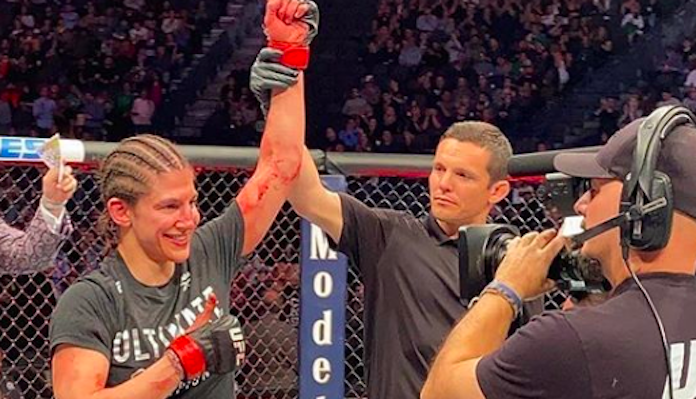 Barber was on her way to the top of the UFC 125lbs division when she suffered a one-sided unanimous decision loss to Modafferi last January at UFC 246 in a fight where she also injured her knee. After missing a year of action, Barber was back in the cage at UFC 258 when she took on Grasso in the co-main event. Unfortunately for Barber, it was her second straight loss as she was outboxed and dropped a unanimous decision. After winning her first eight career fights, Barber now finds herself on a two-fight losing skid.

One of the tough parts about being a UFC fighter is that you leave yourself open to criticism from fans online, and Barber has been the target of the critics for her last two performances. However, while a lot of fans are kicking Barber while she’s down, Modafferi continues to shine a positive light in the MMA community. The veteran took to her social media to give Barber some shine and say that she was impressed by her performance.

I thought it was a great fight and I thought she looked improved from our fight. I was impressed.

Barber is only 22 years old so she still has plenty of time to turn things around in her UFC career. To be fair to her, she hasn’t been losing to unranked fighters. Losing to a highly-respected veteran like Roxanne Modafferi and a top-level boxer like Alexa Grasso is nothing to be ashamed about. She’ll be back soon, and will likely be matched up against someone with less experience than her as she looks to rebuild her confidence.

What do you think is next for Maycee Barber after losing two straight fights?