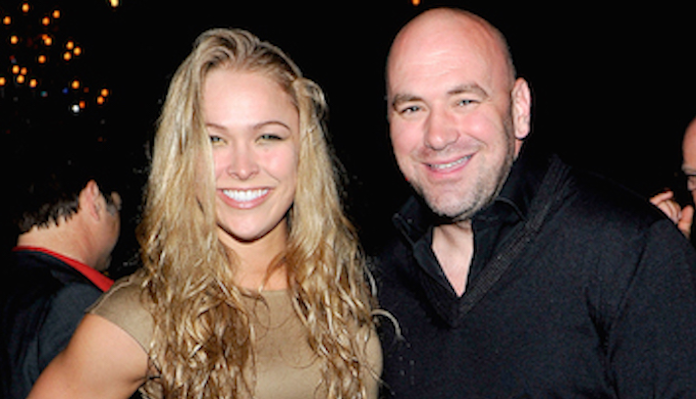 Rousey, who has been in the spotlight in recent days due to some recent comments she made about WWE, was recently a guest on the “Wild Ride! with Steve-O” podcast where she was asked about fighter pay. At one point in the interview, Steve-O pressed Rousey for her opinions on the UFC’s deal with Reebok, which Steve-O feels doesn’t do the athletes any good.

Rousey didn’t agree with Steve-O, who suggested the Reebok deal was a step backward for UFC fighters, and instead defended the UFC Reebok contract.

“If you think about, are any of the NFL players allowed to have individual sponsorships? Are basketball players allowed to put CondomDepot.com on themselves? It gets to the point where like, in the WWE are you allowed to come out to Guns R Us on your titties? It’s kind of the standard that has been set by other sports. UFC was unique in that, when they were smaller, that was part of the hustle. As they got bigger and mainstream some of those characteristics kind of got lost, cause if they wanted to be looked at on the same level as the NBA and the NFL and f*cking baseball and all that sh*t, they kind of had to adapt their model a little more,” Rousey said.

Having said that, Rousey said that while she supports what the UFC is doing with the Reebok deal, she hopes that eventually, the UFC is able to land a better sponsorship deal that gives the fighters a bigger percentage of the pie.

“I would like to see bigger sponsors and more money, bigger deals going made, so what is being split up and divided up between all of the fighters, where it actually gets to be more and more and it’s something I hope matures along with the sport, but who knows,” Rousey said.

Do you agree with Ronda Rousey on the UFC Reebok deal?