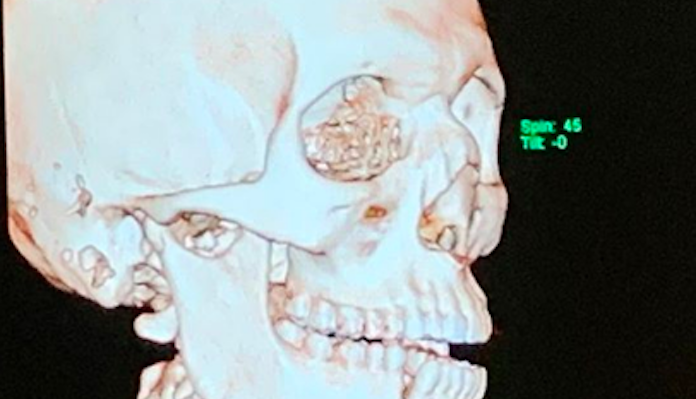 One of the most brutal knockouts on the UFC 238 prelims went flying under the radar due to the the main card featuring three finishes involving bigger-name fighters.

On the preliminary card, rising featherweight contender Calvin Kattar brutally knocked out Ricardo Lamas late in the first round with punches. It was a nasty knockout loss for Lamas in front of his friends and family in Chicago, and one that has led some to push for Lamas to consider hanging up his gloves.

On Tuesday, Ricardo Lamas took to his Instagram to release a statement about the knockout loss and post a couple of x-rays of his injuries.

According to Lamas, the KO was so violent that he suffered three fractures in his jaw.

“Update: I suffered 3 fractures in my jaw during the fight. Been in the hospital since & had surgery yesterday. Titanium plates were installed. I asked the doctor to install small laser guns in my mouth that I could activate with my tongue and shoot through my teeth but he said that was impossible. I’d like to thank everyone who reached out with kind messages. I’d like to thank my family, my beautiful wife, who without I wouldn’t be able to live my dream, my parents & brothers who have all supported me from day one & all my extended family for their support as well as my sponsors. For my beloved city of Chicago, I’m sorry I let you down again, but I wanted to thank you for all the cheers you gave me during my introduction, it gave me chills and I will never forget it, Chicago truly has the best fans. For now, it’s quality time with my family & baby #3 coming early August which puts in perspective what’s really important in life.” – Ricardo Lamas on Instagram