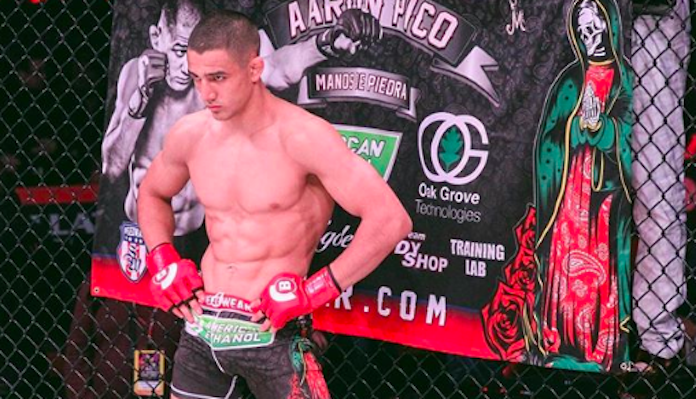 At Bellator 222 inside Madison Square Garden, highly touted prospect Aaron Pico will return to the cage to take on Adam Borics. He’ll be looking to rebound from a knockout loss to Henry Corrales.

Although Pico is coming off of a loss, he is ready to return and believes he’s taken the perfect amount of time off. With the loss, the highly regarded prospect also decided to take a step back and go back to the drawing board. He even undertook a camp change to JacksonWink MMA.

Still, many believe this is not the right opponent for Aaron Pico to return against given Borics is undefeated and a tough fighter. However, according to the 22-year-old, fighters are still turning down fights against him so he just needed to fight anyone.

“To be honest with you with, Cole, I’ve had four top 145’ers turn down fights with me,” he told BJPenn.com. “I’m lucky that Adam accepted the fight. If higher-level guys didn’t accept the fight, why would lower-level guys? People say this is not a smart move, but at the end of the day, I have to fight. If I don’t have fights I don’t make any money. That is the sport I am in. I have to fight tough guys. If I was scared to fight guys I’d work construction.

“There are so many guys that turned down to fight me. There are so many things people don’t know about that happens behind the scenes,” he continued. “Especially when you hear they are fighting Aaron Pico. People say they want to fight at Madison Square Garden, but when they get the fight offer to fight me they can’t all of the sudden.”

Although Aaron Pico believes now would be the time the top fighters should be fighting him given he is coming off of a loss, he says he is a brand new fighter. He now plans to utilize all his skills including his world-class wrestling.

“I think that would be the smart thing. People know how good I am, and how much power I have in my hands and my wrestling. I haven’t even displayed my wrestling, I’ve been greedy with my hands,” Pico said. “But wait until I start to use my wrestling. The real fighters know. All I can do train is to become the best fighter in the world. I’m only getting better.

“People haven’t been able to see my wrestling yet but that is my biggest attribute. My takedown defense is the best in the world,” he added. “My game plan is to not abandon my hands but use my wrestling. Just be a complete fighter. Use my striking and wrestling when I need and the time is right.”

Against Borics, Aaron Pico is prepared for everything. He understands he is a tough opponent, but the 22-year-old believes he hasn’t fought anyone like him. And, he plans on overwhelming him.

“It’s always important to win. Every fight for me is like a world championship fight because everyone is watching me, that is how my career has always been. Everyone is watching me,” said Pico. “It is very important, just taking it one step at a time. Just stay relaxed and use my skills. I’m 4-2 but look at my competition and the cards I’m on. And, let’s be real, Adam Borics has not fought Aaron Pico. Nobody he has fought has been Aaron Pico and the skillset that I bring. I’m ready.”

Pico feels more than ready to leave the cage with a win and get back into the win column. He plans on utilizing all his skills and believes it will be a good night for him.

“I’m not putting no emotional value to it. It is just business. There is no emotional attachment anymore,” he concluded.