Kayla Harrison will likely be heading back to the Professional Fighters League.

According to MMA journalist, Ariel Helwani, PFL is the front-runner to sign the coveted free agent in Harrison. The deal is not done yet but the report says an agreement is all but finalized. It’s also trending in the right direction to be made official soon.

After Kayla Harrison won the PFL’s lightweight tournament again, she became a free agent and many thought she would head to the UFC or Bellator. Future fights with the likes of Amanda Nunes or Cris Cyborg were top of fans’ lists, but according to the report, Harrison is now expected to re-sign with the PFL.

Throughout her free agency process, Harrison has been vocal about meeting with the big three promotions. She also says she is one of the biggest free agents in the history of the sport. 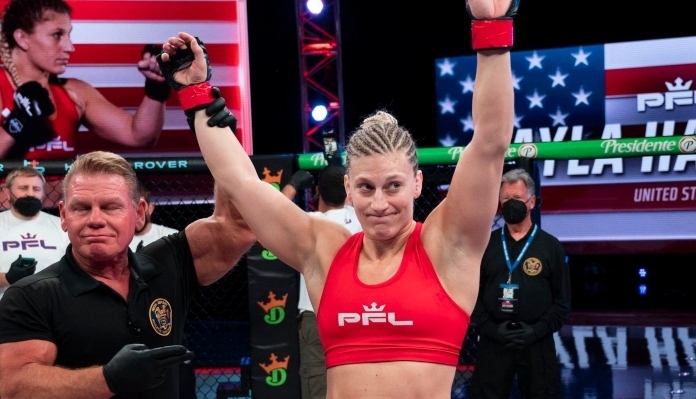 “I worked hard my whole life to hopefully become one of the biggest free agents in the history of the sport,” Harrison said to TMZ back in August. “Obviously, if PFL comes to the table and, you know, has a good game plan, talks about life-changing money, or has a ton of new talent in the pool, then that’s something that, you know, we’re going to talk about.”Kayla Harrison is a two-time Olympic judo gold medalist and is 12-0 as a pro. She’s coming off a dominant 2021 season, where she finished all four of her fights in the first or second round to win the tournament for the second year in a row.Although Harrison has been dominant, the lone knock-on her has been that she hasn’t fought the highest level of competition. Her biggest win is over UFC veteran Larissa Pacheco who she defeated twice. She also holds wins over Cindy Dandois, Genah Fabian, and Mariana Morais.

Are you surprised that Kayla Harrison will re-sign with the PFL?