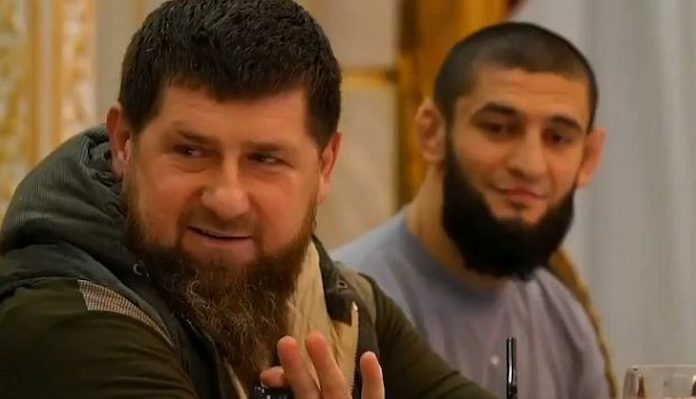 Ramzan Kadyrov, the head of the Chechen Republic, says he has convinced UFC star Khamzat Chimaev not to retire from mixed martial arts.

Chimaev, a native of the Chechen Republic currently living in Sweden, is arguably the hottest prospect in MMA at present, but has been sidelined due to health complications stemming from a recent COVID-19 infection.

In the midst of these health issues, Chimaev seemingly announced his retirement from MMA on Monday night.

Not long after this announcement from Chimaev, Ramzan Kadyrov took to Instagram, where he claimed to have spoken to the prospect and convinced him to reconsider.

“Friends, you’ve probably already heard the news about Khamzat Chimaev, who announced his departure from the UFC in his account,” Kadyrov wrote. “Not believing my eyes, I called and talked to Chimaev.

“Khamzat said that the recovery from illness is slow, and, trying to be honest and frank with the fans, he decided not to give them hope,” he continued. “I told him that ALL the Chechen people were upset by this news. I reminded Chimaev that all our young people, whom he inspires, are pinning great hopes on his victory, but what can I say — MILLIONS OF FANS IN RUSSIA AND THE WORLD! And if fans need to wait for his return, then we will all look forward to his entry into the Octagon with trepidation and patience.

“During our conversation, Chimaev realized how important his career is for every Chechen and promised to make every effort to recover as soon as possible,” Kadyrov continued. “In the near future, he will fly to the Republic, where he will complete a rehabilitation course, hold a training camp and start training. And this means that Khamzat does not leave, HE REMAINS AND WILL BEAT TO THE END!

“I know for sure that Khamzat will take the UFC belt and prove that he is the best of the best. And I urge the fans to make a dua, and ask the Almighty for health and a speedy recovery for our beloved athlete, a Muslim and a real konakh Khamzat Chimaev!”

Khamzat Chimaev was the breakout UFC star of summer, 2020. The Chechen-Swede first picked up two wins in the span of 10 days on Fight Island in July, defeating John Phillips by first-round submission and Rhys McKee by first-round TKO, then picked up his third win of the season when he knocked out Gerald Meerschaert at UFC Vegas 11, also in the first round. He was then booked to fight Leon Edwards on three occasion, but his continued health issues forced the UFC to move on from that matchup.

Ramzan Kadyrov has been the head of the Chechen Republic since 2011, and has been accused of a host of human rights abuses in that time.

Do you think Khamzat Chimaev will fight again?