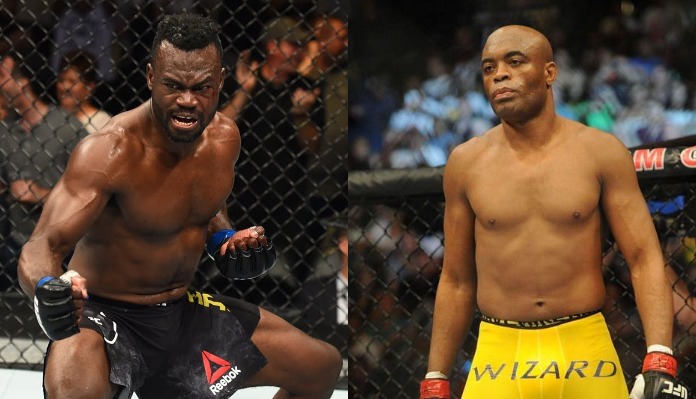 The former middleweight kingpin, Silva (34-10 MMA), was returning to action for the first time since UFC 237 in May of 2019, where he suffered a TKO loss to Jared Cannonier. ‘The Spider’ had gone just 1-4 over his past five Octagon appearances ahead of tonight’s event and had already confirmed that tonight’s bout would serve as his final fight with the UFC.

Meanwhile, Uriah Hall (15-9 MMA) had entered tonight’s UFC Vegas 12 main event with Anderson Silva on a two-fight win streak. In his most recent effort in September of 2019, ‘Primetime‘ had scored a split-decision victory over Antonio Carlos Junior.

Tonight’s UFC Vegas 12 main event lived up to the hype as Anderson Silva and Uriah Hall engaged in a thrilling stand-up battle. ‘The Spider’ looked great in the opening couple of rounds but was eventually dropped by a right hand from Hall in round three. That seemed to turn the tide in favor of ‘Primetime’ who quickly earned a stoppage victory in round four.

Check out how the pros reacted to Hall defeating below:

But let’s not kid ourselves, he is gonna right again at some point

Sad knowing Silva’s final @ufc fight will be with no crowd. Make sure you give this man a standing ovation when it’s all done win or lose!#ufc #UFCVegas #UFCVegas13

OK Anderson, good round one

Thank you Anderson Silva (@SpiderAnderson) for introducing millions of people to the #MMA world and inspiring many generations of upcoming fighters. You are a legend! 🙏🇧🇷 @ufc #UFCVegas12 #SpiderMan

Man Hall has a nasty jab

Hope that’s the end for Anderson. He is a legend!

Thought Anderson started off beautifully but he lost his patience in both instances that he got dropped. Chased Hall with chin up and hands low. Hall did a great job of waiting for his opportunity to find his rhythm and find his chance to counter.

The final walk! That should be the name of Anderson Silva’s story! What an emotional moment for Hall and especially Silva. I don’t know if words can even describe the thoughts and what Silva felt pre and post-fight. Anderson “The Spider Silva”- Forever a legend!#Vegas12

I have gotten nervous every single time @SpiderAnderson fights for many, many years. Thanks for the memories Legend

Wow, Thank you Anderson, we love you

Who would you like to see Uriah Hall fight next following his TKO victory over Anderson Silva this evening in Las Vegas? Share your thoughts in the comments section PENN Nation!