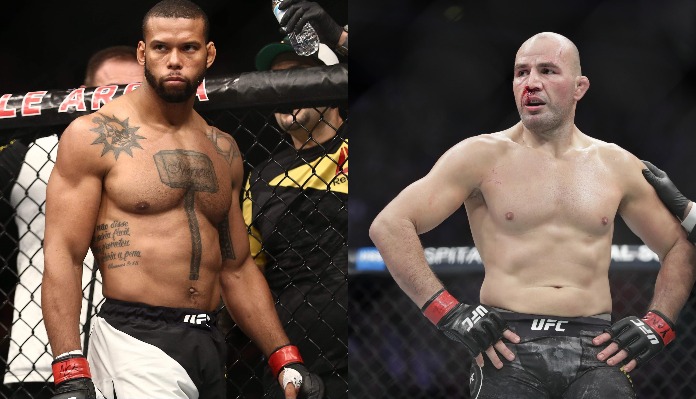 Santos (21-8 MMA) was returning to action for the first time since UFC 239 in July of 2019, where he suffered a split-decision setback in his effort to dethrone Jon Jones of the promotions light heavyweight title. Prior to the setback, which left ‘Marreta’ needing knee surgery, the Brazilian had strung together a four-fight winning streak. During that impressive run Thiago Santos had picked up a TKO victory over reigning light heavyweight champion Jan Blachowicz.

Meanwhile, Glover Teixeira (32-7 MMA) had entered tonight’s UFC Vegas 13 event looking to build off the momentum from his recent TKO victory over Anthony Smith back in May. The former light heavyweight title challenger, Teixeira, had won four fights in a row ahead of tonight’s highly anticipated event headliner.

Tonight’s UFC Vegas 13 main event proved to be an absolute thriller of a fight. Thiago Santos was able to drop Glover Teixeira on multiple occasions in the fight, but the 41-year-old veteran scored timely takedowns to slow down the hard-hitting ‘Maretta’. In round three, Glover would secure a fight-ending rear-naked choke victory.

Check out how the pros reacted to Teixeira defeating Santos below:

Let's go!!! 🤩🤩🤩
The great @gloverteixeira and the master of violence @TMarretaMMA 🦴.#UFCVegas13

I’m exited for this both warriors very tough guys #UFCVegas13

We got ourselves a fight

Teixeira is so tough! Idk how he keeps on doing this!! Just weathers the early storms of his past few opponents and somehow gets them down and works his BJJ magic.
It makes you wonder how much more “fresh” he’d be if he used this fight style his entire UFC career. #UFCVegas13

What an amazing performance by @gloverteixeira #UFCVegas13

The last words I had with Glover at the hotel after our fight was "you will be back big man you are not done.". Man did he come back in a BIG way! Congrats @gloverteixeira on a tough and well fought battle and victory. Go get your strap OG!!

Who would you like to see Glover Teixeira fight next following his submission victory over Thiago Santos this evening in Las Vegas? Share your thoughts in the comments section PENN Nation!