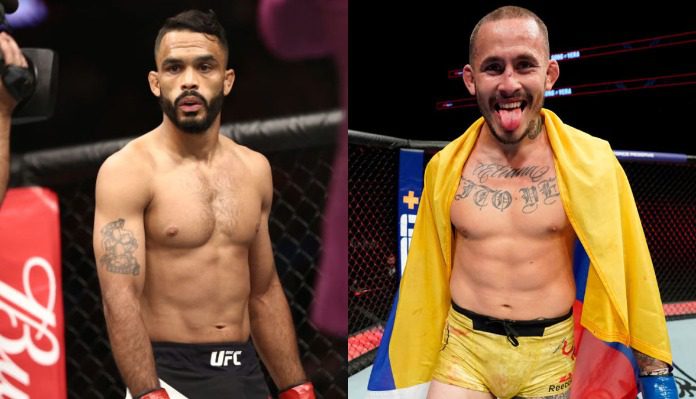 In the main event of UFC Vegas 53, a key bantamweight bout headlines the card as Rob Font looks to get back into the win column against Marlon Vera. Heading into the fight, Font is the -140 favorite on FanDuel while ‘Chito’ is a +114 underdog.

Ahead of the fight, BJPENN.com reached out to pro fighters to get their prediction for the scrap. The pros believe Font’s experience in five-round fights and his jab will be too much for Vera and he will get his hand raised.

Vicente Luque, UFC welterweight: Man, I think that’s an interesting fight but I like Marlon Vera’s style and I think he can get it done.

Damon Jackson, UFC featherweight: I think Font pull that one out. He’s the better boxer than Vera and he’ll just land the better and harder shots.

Cody Brundage, UFC middleweight: I think Chito gets it done late. He always finds a way to win, Rob Font is a great striker but Vera finds a late finish.

Chris Barnett, UFC heavyweight: Rob Font’s striking is better than Chito and it will show here.

Danny Sabatello, Bellator bantamweight: Rob Font, I don’t think Vera is as good as some may think as I think he got a lot of clout by beating O’Malley. He was losing to Frankie Edgar and I think Font is the better striker and can outwrestle him.

Josh Fremd, UFC middleweight: I’m going to go with Rob Font, his experience in five-round fights will be the difference.

Fernie Garcia, UFC bantamweight: I got Rob Font, I love the way he fights, he’s very jab heavy. His boxing will be too good for Vera.

Who do you think will win at UFC Vegas 53, Rob Font or Marlon Vera?