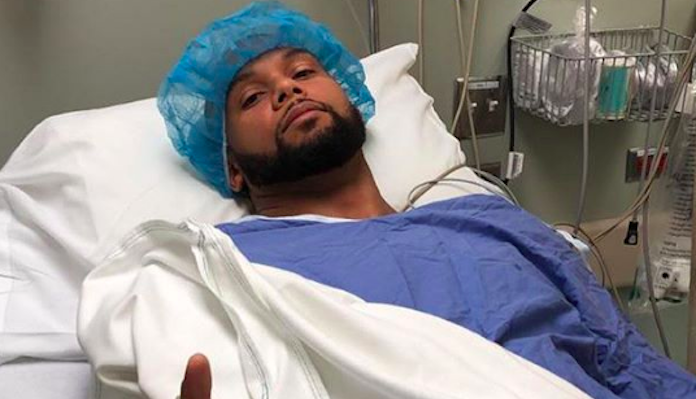 Thiago Santos sustained some serious injuries in his July split decision loss to UFC light heavyweight champion Jon Jones. Despite his valiant effort, the Brazilian challenger exited the cage with a torn ACL, MCL, PCL and meniscus in his left knee and a partially torn meniscus in his right.

Unsurprisingly, these injuries required Santos to go under the knife. Shortly after his fight, he underwent a complicated surgery to repair his badly damaged knees.

“After four hours of surgery, the doctors say everything is fixed,” Santos wrote on Instagram shortly after his surgery. “Now my focus is on a full recovery so I can get back in there better and stronger!”

From there, his recovery began. And from the sounds of it, it was not easy. Roughly a week removed from his surgery, Thiago Santos took to Twitter to discuss the pain he was dealing with.

It’s been 7 days since the surgeries on my knees. I must admit, these days are tough, filled with a lot of pain. I can’t sleep or eat properly due to the medications. I even fear using the bathroom because the walk there is a battle. Thank God the pain is subsiding. pic.twitter.com/2oD39DEsvN

“I must admit, these days are tough, filled with a lot of pain,” Santos wrote on Twitter (via Bloody Elbow). “I can’t sleep or eat properly due to the medications. I even fear using the bathroom because the walk there is a battle. Thank God the pain is subsiding.”

The good news is that, after a challenging summer, Thiago Santos is now out of his knee brace — and he stills seems to be in fantastic shape.

Given that he’s been out of commission, Thiago Santos does not currently have a fight booked. That being said, he remains one of the light heavyweight division’s top contenders, and could conceivably earn a rematch with Jon Jones quite soon based on the razor close nature of their first fight.

He’s recently been calling for a rematch with the champ, and the champ seems willing to grant him that opportunity.

I think that’s only fair https://t.co/FHYiuMMhhA

“I think that’s only fair,” Jones wrote on Twitter when asked about a rematch with Thiago Santos.