Paige VanZant will be making the walk to the Octagon once again.

VanZant will return on July 11 at UFC 251 against Amanda Ribas in a flyweight bout according to Combate. The event could also take place on Fight Island as VanZant wrote “coming to an island near you” on social media.

Although this fight is set to take place at UFC 251 this is not the first time the two have been booked to fight one another. They were set to meet at UFC Brasilia on March 14 at strawweight. But, an injury to VanZant forced her to pull out of the bout.

Paige VanZant hasn’t fought since she submitted Rachael Ostovich at UFC Brooklyn in January of 2018. Since then she has been dealing with a bevy of injuries including another broken arm. 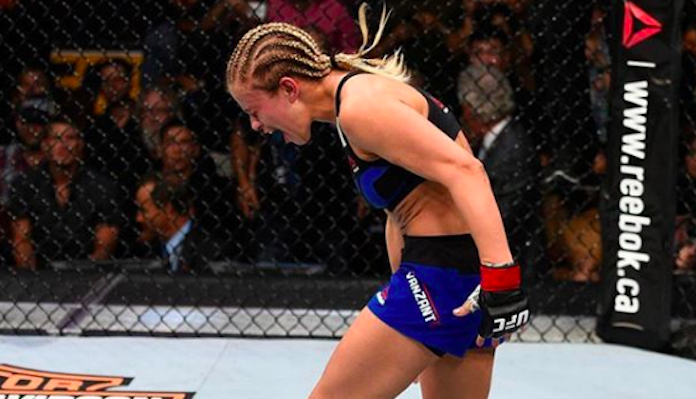 The American in VanZant is 5-3 inside the Octagon with notable wins over Felice Herrig and Bec Rawlings. She has also headlined two UFC shows, losing both by submission to Rose Namajunas and Michelle Waterson.

When VanZant steps into the Octagon on July 11 it will be on the final fight of her contract. “12 Gauge” has been open about her upcoming free agency and wanting to test the market. So, this could very well be her final UFC appearance.

Amanda Ribas, meanwhile, is coming off a decision win over Randa Markos at that UFC Brasilia event. Before that she pulled off an upset with a decision victory over Mackenzie Dern at UFC Tampa. The Brazilian is 3-0 inside the Octagon with her other win coming over Emily Whitmire and is 8-1 as a pro.

This is a very interesting fight for both women. It is also interesting that it will now take place at flyweight instead of strawweight where they were originally scheduled to fight at. For VanZant a win over a surging contender in Ribas will be a good look for her entering free agency. For Ribas, a win over 12 Gauge is another big name to go on her record and help her climb the UFC ranks.

Who do you think wins this fight between Paige VanZant and Amanda Ribas?