Sean O’Malley rewatched his highly-discussed bout with Petr Yan at UFC 280 and believes his knee in the third round might have concluded the Russian’s UFC tenure.

‘Sugar’ was awarded the split decision with many fighters and pundits disagreeing with the judges’ verdict. The new #1 contender at bantamweight believes he won. He was on the MMA Hour this week, where he described how he’s a threat to anyone and “dangerous” in the first round, before adding,

“I was dangerous in the third, too. I just about took Yan’s head off. I kneed him, cut him open, landed a couple flurries, threw another knee when he was up against the cage. That might’ve really sent him away from the UFC. I know he’s talking about maybe not being in the UFC. That knee would’ve put him in ONE FC or Bellator.” 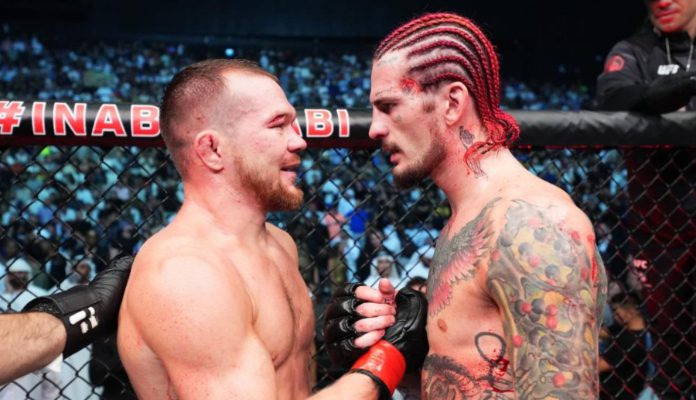 Sean O’Malley has never lacked for confidence. The LFA veteran was saying that he’s the future UFC champion at 135lb even before his clash with Yan. Now he has a very real chance to realise his ambition. It looks likely that the 28-year-old will be granted the next shot at Aljamain Sterling’s title.

Sterling is currently riding an 8-fight winning streak including victories over two former champions. O’Malley is convinced he has what it takes to beat ‘The Funk Master,’ and said,

“I believe in my skill set, I think we just gotta go to a dark place. Go where we were with Petr [Yan] and that’s where we beat him, but I also could drop him early. I’ll always say that against anybody I fight. I could be on a 37-fight losing streak and I’ll say I still could drop him in the first round.”

Sean O’Malley’s chances of securing the fight have been strengthened by the champ. Sterling recently admitted that the ‘Suga Show’ is a more appealing match than Henry Cejudo. ‘Triple C’ has been campaigning for a comeback and vying for a crack at Sterling’s belt. However, the Serra-Longo star recently told MMA Junkie that O’Malley “Just draws better than Cejudo.”

Which fight would you rather see?