Joe Rogan praises Sean O’Malley’s performance at UFC 280, but feels he didn’t win: “I thought Petr Yan won at the end of it”

You can add one more name to the list that believes Petr Yan deserved a win at UFC 280.

‘No Mercy’ returned to action last Saturday in Abu Dhabi against Sean O’Malley. The bantamweight clash was an important one, as it was supposed to crown the next title challenger. Also set for the card was the champion, Aljamain Sterling’s return against TJ Dillashaw.

During the bantamweight title eliminator, it was a back-and-forth fight. However, in most fans’ and fighters’ views, it was Yan who was doing much of the better work. Despite that, ‘Sugar’ won by a split decision after the 15-minute contest.

The decision was blasted by many, including Khabib Nurmagomedov, on social media. In the days following the fight, Yan also blasted the decision. The result might’ve upset the former champion so much, that UFC commentator Daniel Cormier believes he may leave the promotion.

Now another UFC commentator, Joe Rogan, has chimed in on the fight. The podcaster wasn’t on the call last weekend but discussed the card on his podcast. There, he praised Sean O’Malley and his performance at UFC 280.

However, the longtime UFC analyst also stated that he didn’t agree with the result. Rogan opined that Yan won the contest, but that with the grappling and scoring system, it can be hard to score. 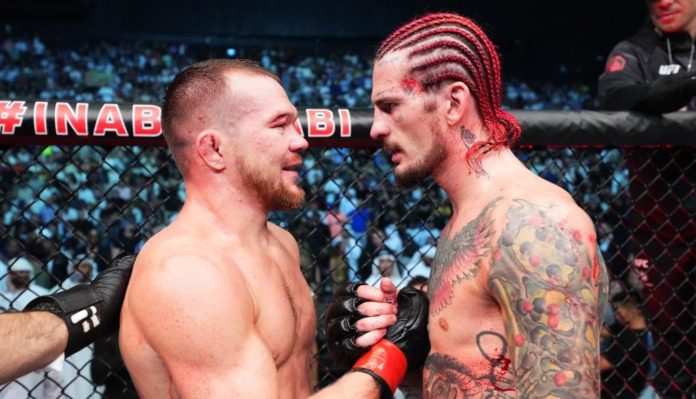 “A lot of people were shocked [at the decision],” stated Rogan on his podcast. “There’s a video of Khabib [Nurmagomedov] watching the decision and Khabib is like, ‘How, how did he win? How?’… He was certainly in the fight against Petr Yan. He was a former champion, one of the best in the division, by far the number-one contender. It was a very close fight, and he definitely hurt Petr on multiple occasions, caught him with that big knee, and rocked him.”

He continued, “The question is, how much is the takedown worth, how much is control worth? Takedowns without damage, what is that valued? I’m not denying that I thought Petr Yan won, because I did think he won at the end of it… One of the problems is that I feel we’re very limited by this 10-9 scoring system… I don’t think it’s a good system for MMA.”

Despite the thoughts of Joe Rogan and others, it was ultimately Sean O’Malley who got the judges nod. However, it seems that a title fight might be off the table, as Henry Cejudo appears to be next in line.

What do you think about these comments? Do you agree? Sound off in the comment section below PENN Nation!