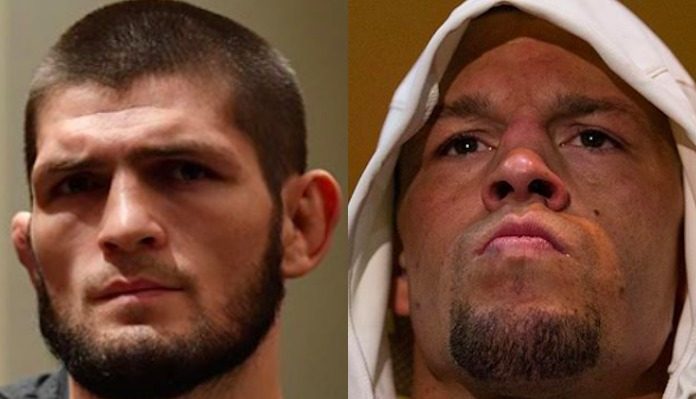 Nate Diaz has taken a shot at Khabib Nurmagomedov and his Hall of Fame induction as the cold war between the two continues.

Over the course of the last few years there hasn’t exactly been much ‘peace’ between Nate Diaz and his UFC rivals. The Stockton king enjoys going after them both physically and on social media, and while he hasn’t fought as often as many fans would’ve liked, he still knows how to keep us entertained.

The 37-year-old has one fight remaining on his UFC deal and seemingly plans on leaving the promotion in the wake of that contest. However, alongside trying to secure that fight, he also isn’t done calling out some of his foes – including Khabib Nurmagomedov.

During an interview with Ariel Helwani, Diaz had the following to say about the former UFC lightweight champion.

“Khabib’s a f**king little b**ch too. Khabib just was like, who did he beat for the title he got? Dustin Poirier, Justin Gaethje? They’ve both been finished off, over and over, the same way that he beat them. You ain’t no good. You are a scared fighter, scared of fighting the whole time.”

They may never have fought inside the Octagon, but Diaz clearly has a problem with the rise of Khabib and his entry into the Hall of Fame.

What do you think about Nate Diaz’s Khabib comments? Do you think there’s a chance the veteran will re-sign with the company after his next fight?