Nate Diaz shared a message for all of the fighters picking him to lose against Leon Edwards at UFC 263.

Ahead of his highly anticipated welterweight collision with Edwards, ‘The Stockton Slugger’ was interviewed by ESPN. During the discussion, Diaz was asked to share his thoughts on so many of his colleagues are picking against him on Saturday and why they are wrong.

“I saw a website with predictions on the fight, you versus Edwards, and other fighters making predictions, and almost to a man they all said ‘Listen, I love Nate Diaz. Love what he means to our sport, but I have to go with Edwards.’ Why are they wrong Nate?” 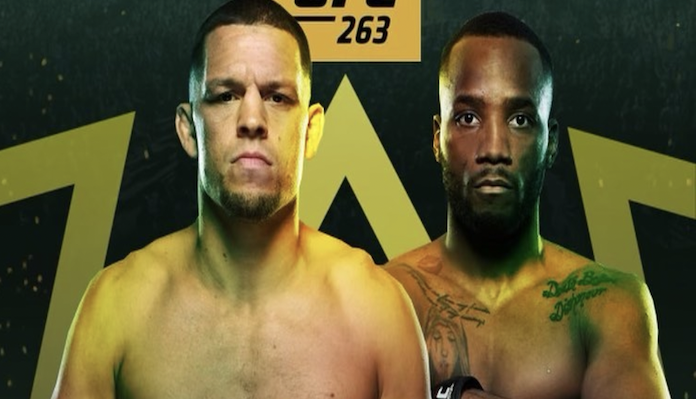 The current Vegas odds for the fight have Nate Diaz pegged as a +365 underdog. That notion doesn’t seem to bother the former UFC lightweight title challenger, but having other fighters speak negative of him is another story.

“Well that’s been my whole career is sh*t like that.” Nate Diaz explained. “If any of the fighters.. to all the fighters out there saying anything about me if it’s not positive then just shut the f*ck up and f*ck you. That’s what I think about you. And umm, that’s how my whole career has gone and been and if you ain’t got nothing nice to say then don’t say sh*t at all. Because that’s how I work anyways. If I don’t got nothing nice to say I keep my predictions to myself. To all those guys saying about me losing, they’re not sh*t themselves.”

Nate Diaz has not competed since suffering a TKO loss to Jorge Masvidal at UFC 244 in November of 2019. Prior to that setback, ‘The Stockton Slugger’ was coming off a unanimous decision victory over Anthony Pettis.

What is your prediction for Diaz vs Edwards?