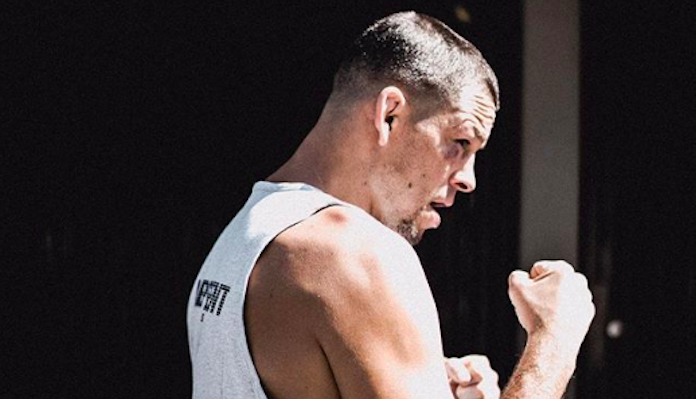 Former UFC lightweight title challenger Nate Diaz would like to be boxing Canelo Alvarez or Daniel Jacobs, but instead is “stuck in a cage”.

Alvarez and Jacobs will meet in a highly anticipated title unification bout this evening in Las Vegas. That event will air live on DAZN at 9pm est.

If it were not for his current UFC deal, Nate Diaz believes he could be competing inside the squared circle this evening.

Diaz, who hasn’t stepped foot in the cage since suffering a controversial majority decision loss to Conor McGregor at UFC 202, took to social media to voice his frustration.

“I should be boxing these guys.” Diaz wrote on Facebook. “I’m stuck in a cage though.”

‘The Stockton Slugger’ was linked to a fight with newly crowned UFC interim lightweight champion Dustin Poirier at November’s UFC 230 event in New York. However, that fight failed to come to fruition for multiple reasons.

One fight that still seems like a real possibility for Nate Diaz is a trilogy bout with Conor McGregor.

Whether or not fans will get to see the Pride of Stockton compete again remains to be seen.

Would you like to see Nate Diaz compete in boxing? How do you think he would do against the likes of Canelo Alvarez or Daniel Jacobs? Sound off in the comments section Penn Nation!