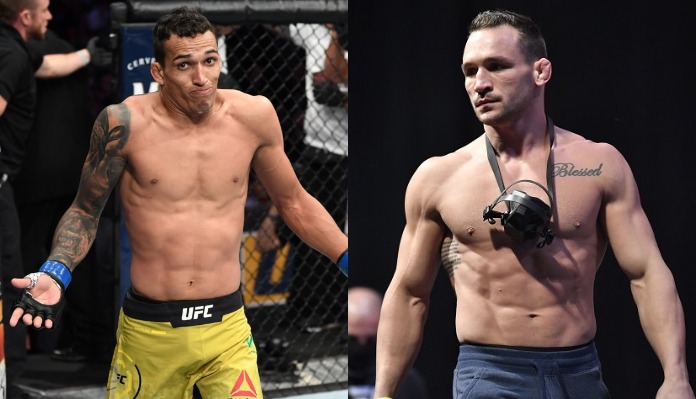 Michael Chandler was looking to earn his fourth consecutive knockout and the lightweight title when he squared off with Charles Oliveira at UFC 262.

Chandler (22-6 MMA) had entered tonight’s event with a ton of momentum having earned three first round finishes in a row. During that stretch ‘Iron’ had scored stoppage wins over Sidney Outlaw, Benson Henderson and Dan Hooker.

While Michael Chandler came close to earning another first round win this evening in Houston, his title aspirations were ultimately put to bed early in round two after ‘Do Bronx’ cracked him with a big right hand. The Brazilian quickly pounced on the opportunity and promptly put Chandler away with follow up strikes.

Chandler attended tonight’s UFC 262 post-fight press conference where he issued the following statement on his disappointing setback to Oliveira.

“I feel like I’m right where I am supposed to be. I do, I was just enjoying the moment. Enjoying (having) the fans back. I love fighting with the fans,” Michael Chandler said. “I loved being in there with the fans. This is one of the reasons why we do what we do. Because the people that buy the pay-per-views, the people that show up to the events, the people that cheer or boo. You know, talk trash on Twitter whatever, it doesn’t matter. The highs, the lows, the happy and everything in between. The fans make it what it is.”

“I just felt like I was in the right moment. A smile was on my face again. I feel like I am fighting on borrowed time still. You know, there was moments in my career where I never thought I’d end up here. I never thought that the door would open. And now it has and the first one was the highest of highs and this ones… It is not the lowest of lows. Because Charles Oliveira is a world class fighter, and fighting for the UFC title is a world class opportunity. But as my son knows, every young man falls but every young man gets back up. The sun will rise tomorrow when I fly home without the belt. We’ve got some explaining to do but we’re going to figure it out.”

Who would you like to see Michael Chandler fight next?