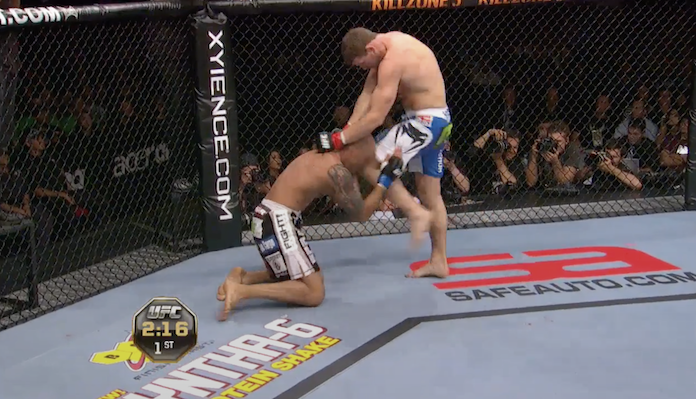 Former UFC middleweight champion Michael Bisping believes that there should be tougher penalties to fighters who land illegal knees.

Bisping himself was at the center of controversy with an illegal knee when he landed one on veteran Jorge Rivera at UFC 127 in February 2011. Bisping was given a one-point deduction by referee Marc Goddard for his infraction, but he ended up winning the fight in the second round via TKO after Rivera continued despite the illegal knee. Re-watching the fight shows that Rivera was concussed and the doctors should have stopped the fight. But because they didn’t, they allowed an already damaged fighter to go back into the Octagon and take more punishment. Bisping did what he had to do when he finished off the job in the second round with punches, but either way, he knows the situation first hand.

In a recent interview with MMAjunkie.com, Bisping said that he wants to see tougher penalties enacted for fighters that land an illegal knee in MMA fights.

“I hate seeing people play this game of putting their hand down. I’s a bit of a cowardly move if you ask me. I don’t know, because they always talk about, ‘Was it intentional, or was it not intentional?’ Well, they’re always intentional. You didn’t accidentally knee him. But they didn’t necessarily know that he was technically down. But yes, of course your brain sends the message to throw the knee, and you throw it to the face,” Bisping said.

“And I know a lot of people watching this might be thinking that I’m a hypocrite because they’re probably thinking about Jorge Rivera. I did knee him in the face when he was down, but he was getting up and in the heat of the moment, you’re in a fight. Adrenaline is spiking like crazy, and especially if you think you’ve got him hurt and you’re going to win the fight, you’ve got to make these micro judgments in a fraction of a second – and it’s very hard. So I don’t think they need to change the rules necessarily, but just tougher penalties.”

Do you agree with Michael Bisping that we need harsher penalties for illegal knees?