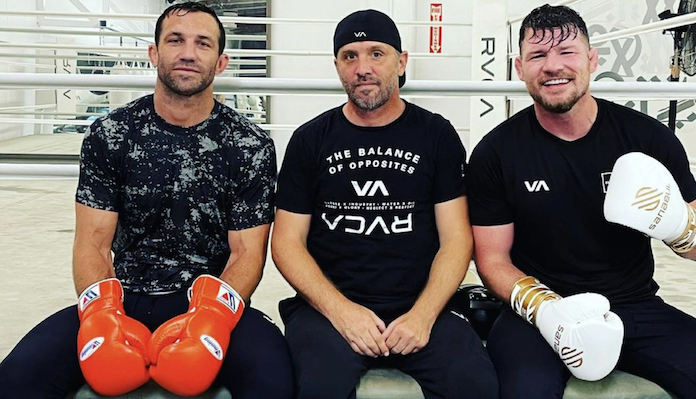 Former UFC middleweight champions Michael Bisping and Luke Rockhold, once bitter rivals, posted a video of them grappling at the RVCA Gym.

Bisping and Rockhold fought twice in the Octagon and had one of the most heated rivalries in the UFC during their primes. In November 2014, Bisping and Rockhold met for the first time, with Rockhold winning the fight via second-round submission. They then rematched in June 2016 at UFC 199 and, in one of the greatest upsets in MMA history, Bisping knocked out Rockhold in the first round to take home the UFC middleweight title. Both men were not friendly with each other for many years after that, but as of late they have become more cordial as both men are now training at Jason Parillo’s RVCA Gym.

On Monday, Bisping took to his social media to post a photo of himself and Rockhold along with Parillo following a workout, and also shared a video of the two fighters grappling.

It is definitely a strange sight to see Rockhold and Bisping as friends given that they had one of the most bitter rivalries in the UFC during their time in the Octagon, but it just shows you that in this sport the fighters are able to put their differences aside from them. After all, when they are in the Octagon it’s their job to fight each other, and it’s their job to hype up the fight and chirp each other. With Bisping now happily retired and enjoying his career as a UFC broadcast, he won’t be fighting Rockhold in a trilogy fight anytime soon. So with Rockhold hopefully returning to the Octagon this year, Bisping will be helping him out.

What do you think about Michael Bisping and Luke Rockhold turning their rivalry into a friendship?