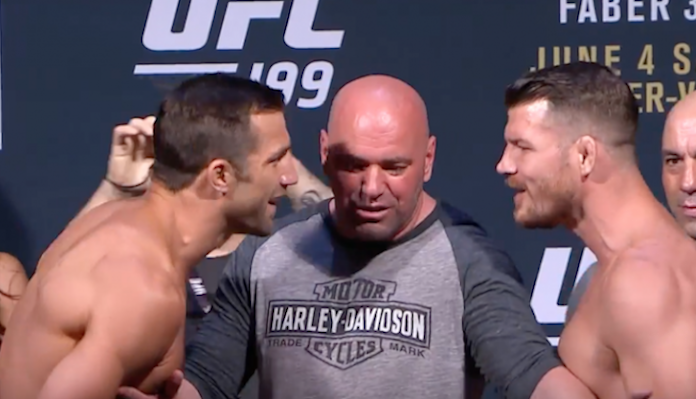 Bisping and Rockhold fought twice in the UFC and for many years their rivalry was one of the UFC’s most heated. In November 2014, Rockhold submitted Bisping with a guillotine choke at a UFC Fight Night card in Australia. Two fights later, Rockhold defeated Chris Weidman via TKO to become the new UFC middleweight champion. At UFC 199 in June 2016, Rockhold was set to take on Weidman in a rematch. However, Weidman pulled out of the fight and Bisping got the rematch with Rockhold. Despite taking the fight on short notice, Bisping pulled off one of the most incredible upsets in UFC history when he knocked Rockhold out as a massive underdog to take home the middleweight title.

In the five years since losing his belt, Rockhold has only stepped into the Octagon three times, defeating David Branch via TKO in 2017 before losing via knockout to Yoel Romero and Jan Blachowicz in 2018 and 2019, respectively. After taking 2020 off, Rockhold is now open to returning to the Octagon, and he’s been doing some training under Parillo’s tutelage at RVCA gym. Parillo, of course, was Bisping’s longtime striking coach, the man who coached him to knock Rockhold out in a devastating fashion. Although many fans might assume that these two still hate each other, that doesn’t appear to be the case.

Taking to his social media to answer a common question he gets from the fans, Parillo showed a video of Bisping and Rockhold hugging it out at the RVCA gym.

A couple gentlemen saying hello! Hope this answers the questions I always get! @mikebisping @lukerockhold @rvcasport!

With Luke Rockhold and Michael Bisping sharing a mutual friend and coach in Parillo, you have to wonder if it’s possible these two might get a little training in with each other, too. While once bitter rivals, it appears these two fighters have finally settled their beef.