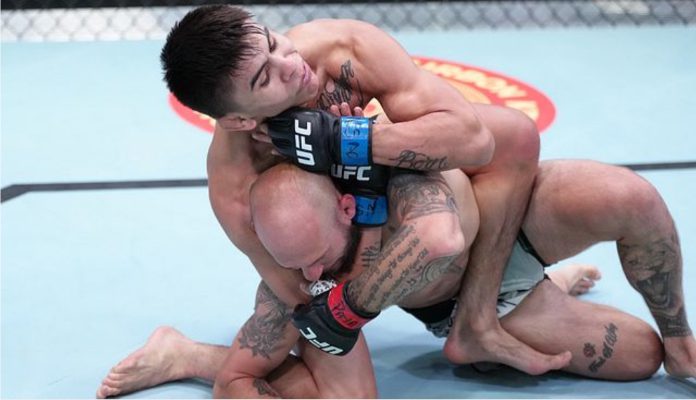 Mario Bautista believes he made a statement with his first-round submission win over Brian Kelleher at UFC Vegas 57.

Bautista entered the fight knowing Kelleher would be at his most dangerous in the first round. Yet, the plan was to also be aggressive early and force Kelleher to make a mistake, which is what happened. Just two minutes into the opening round, Bautista ended up sinking in a choke and got the first-round submission.

“It’s like that old saying, train hard, fight easy and it was exactly like that. I wish they could all go like that, I couldn’t be any happier with that one,” Bautista said to BJPENN.com. “Honestly, I figured I would get the finish and I knew it was going to be a quick night or a long one and I had to match his intensity and not get left behind. I think I surprised him by getting started right away.”

With Bautista getting the first-round win, not only does he think that moves him up the bantamweight ranks but he also calls it the biggest win of his career. The goal now for Mario Bautista is to fight later this year and should he win that, he believes he could get a top-15 opponent.

“On paper, this is the biggest win of my career,” Bautista said. “This win gets me probably a win away from getting into the top-15. As far as the opponent, it doesn’t really matter who’s next.”

Although Bautista doesn’t care who is next for him, the goal is to return in October and in front of fans.

“I’m definitely going to get one more in before the end of the year. I’m thinking probably around October and hopefully in front of fans,” Bautista concluded.

Who would you like to see Mario Bautista fight next?