Luke Rockhold explains why he was so mad at UFC president Dana White: “Dana never gave me a chance”

Luke Rockhold has aired some of the reasons he’s felt animosity towards UFC president, Dana White.

The former Strikeforce and UFC middleweight champion is recently retired from the sport having given a memorable performance despite losing to Paulo Costa at UFC 278 last weekend.

The 37-year-old has competed inside the Octagon for almost decade and appeared on the MMA Hour where he told Ariel Helwani why he’s felt so displeased with the way he was treated down the years.

‘Why do you think i’m so mad at Dana? Because Dana never gave me a chance. From the moment I came in the UFC he never gave me a fu***** chance. He wrote me off. Never highlighted my years in Strikeforce or anything I did on the wins. Only my losses,” Luke Rockhold explained.

“Dana White controls the narrative of what the public perceives. It’s like, he fu**** me from the start and it took me 16, 17 years to come back and give a fight like that to earn my respect. Nothing I did in the past mattered until now. Alright. That’s why I feel the way I feel sometimes. That’s why I say the things I say. You’ve got to understand the power that you have in that situation. The narrative you create. The public believes what they want to believe and what you tell them to believe,” added the Californian.

Luke Rockhold on why he was mad at Dana.#TheMMAHour pic.twitter.com/WH9XrDDSyf

Luke Rockhold made his UFC debut in Brazil in 2013 where he suffered a brutal knockout against Vitor Belfort. The stoppage was awarded knockout of the year, and Rockhold was not happy at being given such a match-up on his first outing for the organisation.

“They made my go down to streroidville in fu***** Brazil and fight Vitor (Belfort.) Everyone else got respect and was going into world championship fights and consideration for…I got nothing you know? A two-time defending Strikeforce champion coming in there and ‘you haven’t done sh**,’ he explained.

“I had to go fight Vitor when they knew what they were doing back then. Protecting him. And the motherf***** was juiced to the gills. I had to get cleaned by him and knocked down and belittled by everybody and then build myself back up. (But) I’m good at building myself back up,” Luke Rockhold continued.

The former champ engineered a spectacular return to form as he racked up a five-fight winning streak with three performances bonuses. The run culminated in Rockhold winning the UFC middleweight title when he knocked out Chris Weidman in the fourth round at UFC 194. 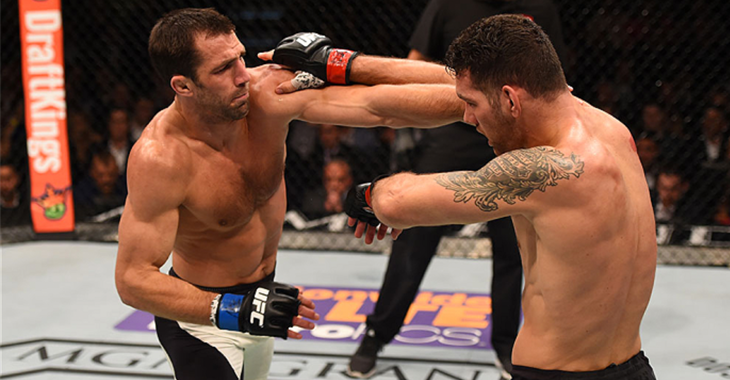 Do you think that Luke Rockhold was harshly treated by Dana White and the UFC?