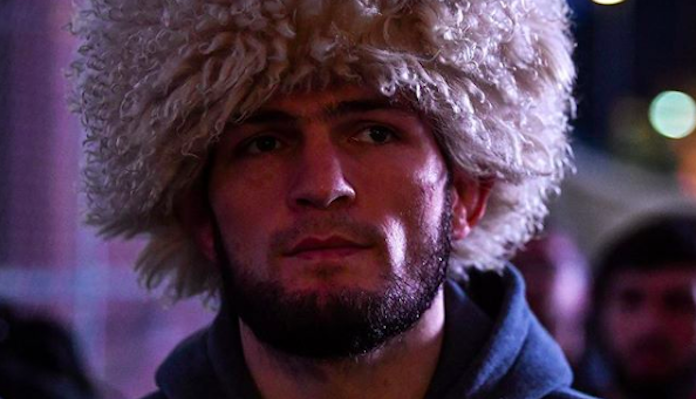 The UFC lightweight champion, Khabib Nurmagomedov has earned a reputation as one of the greatest MMA champions of all time. Since his professional debut in 2008, “The Eagle,” has utilized his grappling skillset to dominate opponents. As the Russian has risen through the ranks to become the UFC’s undisputed lightweight champion, Nurmagomedov admits that he doesn’t want to hurt his opponents anymore. During a talk with Russian school students, he said (via RT news):

“I had fights in my career where I understood that I could hurt my opponent more, but I’d talk to him, tell him to give up so that I don’t beat him too hard,”

“For example, if I had a painful hold where I could break something, I wouldn’t tighten it all the way, it’d just fix it so that the opponent would tap out.

An example would be his last fight against Dustin Poirier at UFC 242. Many spectators believed that “The Diamond’s” guillotine choke attempt was close to submitting the champion. However, during a post-fight interview, “The Eagle” said he allowed the submission attempt to lull his opponent into a false sense of security, eventually turning the tables and finishing Poirier once he had exerted all his energy.

The champion tries not to hurt his opponents and finish them in the most efficient method possible:

“Because I have no aim to hurt anyone in this sport. Yes, we compete in a very brutal sport,” Khabib Nurmagomedov added.

“At the beginning, when you’re just starting out and winning fights, it brings you some sort of pleasure. You enjoy it.

“Recently I haven’t had that. In the last couple of years I’ve gone out there and won and it doesn’t bring me any real joy to be honest.