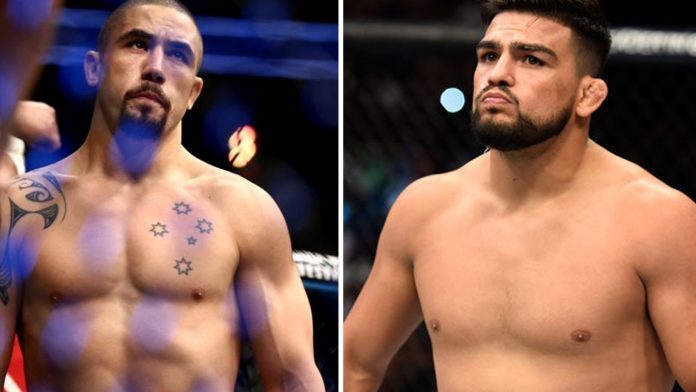 Kelvin Gastelum decided to take a jab at Robert Whittaker shortly after it was announced that the champion had arrived at the stadium for UFC 243.

Shortly after UFC President Dana White took to social media to announce that Robert Whittaker had arrived at Marvel Stadium, Kelvin Gastelum took to Twitter with the following reaction.

He seems to have made it to the arena this time 🤨

“He seems to have made it to the arena this time..”

Gastelum was supposed to fight Whittaker for the promotions undisputed middleweight title at UFC 234 in February. However, ‘Bobby Knuckles’ was ultimately forced out of the fight last minute due to illness which required surgery.

Instead, Kelvin Gastelum ultimately ended up fighting Israel Adesanya at UFC 236 for the promotions interim middleweight title. ‘Stylebender’ ultimately emerged victorious by unanimous decision after a ‘fight of the year’ war with ‘KG’.

Gastelum is now slated to square off with former welterweight title challenger Darren Till in a middleweight contest at UFC 244 this November in New York.

Whether or not fight fans will ever get to see a fight between Kelvin Gastelum and Robert Whittaker remains to be seen.

What do you think of Gastelum’s jab at Whittaker ahead of tonight’s UFC 243 title unification bout? Sound off in the comments section PENN Nation!

Get all of tonight’s UFC 234 live results and fight highlights here.