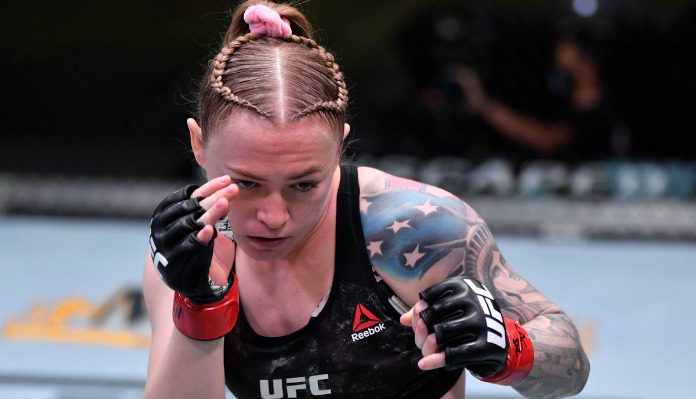 Kay Hansen was supposed to fight on January 15, but after hearing UFC 270 was the week after in Anaheim, she made it clear she wanted to be on that card.

Hansen is from Anaheim and of course wanted to be a part of the card but her managers initial request to have the bout moved didn’t happen. However, she decided to take matters into her own hands and messaged Dana White herself to move the fight, and just a day later she got her wish.

“It was me for sure. I went to Dana with it and told him it was my hometown and I want to fight there and it was switched right away,” Hansen said on Just Scrap Radio on BJPENN.com. “I’m all for my trying to make my own opportunities and I had to go all out for this one… It’s going to be so cool, I’ve had two fights in the UFC and both were at the Apex, no crowd. For me, this is a new debut in a sense, I get the whole UFC arena feel and it’s in my hometown.”

Not only will Hansen get the chance to fight at home in Anaheim, but she will also be moving back up to flyweight to face Jasmine Jasudavicius. She has competed at 125 on the regional scene before, but this will mark her flyweight debut in the UFC.

According to Hansen, who last fought in November of 2020, she says she wanted her return to just be focused on the fight and not the weight cut. Along with that, she needed to let her body heal after dealing with an eating disorder for years.

“If I’m being completely honest, I’m hoping and planning going back to strawweight, probably after this fight. I’m walking at 130 right now, so I’m not cutting anything,” Hansen explained. “The reason I’m fighting at 125 is this while past year, I’ve been going through an eating disorder for a while now so this past year my metabolism, my body has just been through a whole lot. I felt like going through a whole camp on being healthy and happy when it comes to fighting, I didn’t want the weight cut to be a thought in this fight. I didn’t want to deplete myself after spending a year trying to fix years and years of depleting myself incorrectly. I do hope to go back to 115 but I’m excited to fight at 125.”

Although this is a new weight class for her in the UFC, Kay Hansen doesn’t think that size will play a factor.

In the fight against Jasudavicius, Hansen is expecting it to be a tough one but she is confident she will get her hand raised. She also hopes she’ll be able to get a stoppage win.

“I’m always looking for the finish but I’m always ready to go the 15 minutes. Ideally, I’m looking for a finish but so is everyone else,” Hansen said. “For me, I’m going out there to do what I do best. She could grapple or not, I could try and grapple her, or we just strike. We are both well-rounded so all I’m expecting is a tough fight.”

Should Hansen get her hand raised, she says it will be surreal to hear her name be called by Bruce Buffer in her hometown.

“This whole camp has been pretty emotionally in the best way. It’s going to be surreal, in my hometown on a pay-per-view card. Everything is coming together,” Hansen concluded.

Do you think Kay Hansen will defeat Jasmine Jasaudvicius at UFC 270?