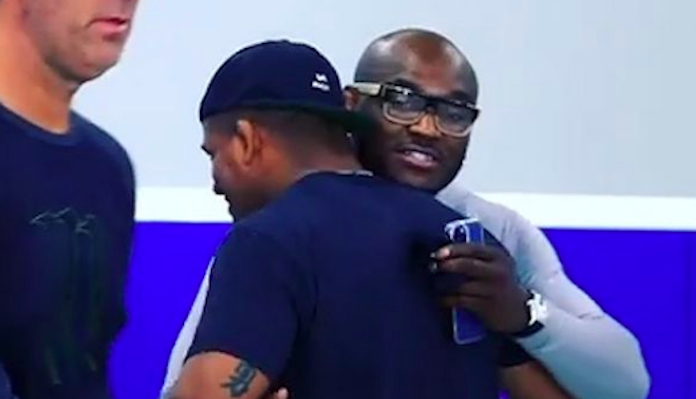 For many years, Usman and Burns called themselves teammates at Sanford MMA. Eventually, however, Usman left the gym to train under Trevor Wittman in Colorado. Not long thereafter, he and Burns were booked to clash for the welterweight strap.

Usman and Burns finally met at UFC 258 in February. While Burns started strong by dropping the champion early in round one, Usman ultimately surged back, winning by third-round TKO.

Several weeks removed from that fight, Usman returned to Sanford MMA to help a long-time training partner prepare for an upcoming fight. While he was at the gym, he crossed paths with Burns.

See the pair’s encounter below (via ESPN MMA):

Speaking in a video posted to social media, Burns opened up on this encounter with his former training partner and opponent.

“Last week, March 2, we got a special visit right here at Sanford MMA: The champion, Kamaru Usman, a former teammate and my last opponent,” Burns said. “He came here [because] a friend of ours is fighting in Abu Dhabi. He’s very close with Kamaru, so Kamaru’s going to be cornering him.”

Burns says his post-fight interactions with Usman were classy and respectful, but added that he expects to fight his former training partner again in the near future.

“He came to the gym, it was good,” Burns said. “The respect is still alive. We shook each other’s hands, we exchanged a couple words. We’re all good right now, but I still believe we’re going to see each other again soon, in the Octagon.”

Do you think we’ll see Kamaru Usman and Gilbert Burns fight again in the future? If so, who do you think will win the rematch?