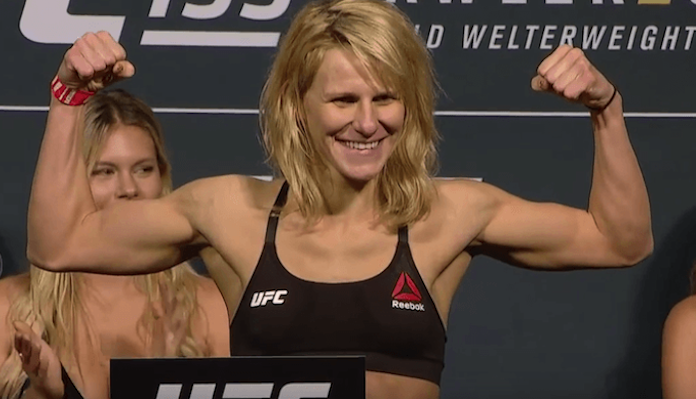 Can superstars also be ‘stupid stars’? According to Justine Kish, the answer is yes. She recently called out flyweight star Paige VanZant on Twitter in hopes of setting up a fight.

“I can’t take it anymore. @paigevanzant keeps acting like a super star but her actions lately prove that she’s just stupid star. @ufc match me up with this 🌟🙏🏻. There’s a better blonde in town that actually wants to 👊🏼.” – Justin Kish on Twitter

Kish is on a two fight losing streak — the only two losses of her professional career. She made her UFC debut in 2016 and has had a hot-and-cold record ever since. The 31-year old last fought in January, 2019 when she lost to a split decision against Ji Yeon Kim.

VanZant’s last fight was also in January, when she beat Hawaii’s Rachael Ostovich by submission. She also has two recent losses dating back to 2016. First, Michelle Watson submitted VanZant with a rear naked choke in the first round. Later, Jessica-Rose Clark took home the unanimous decision victory over VanZant at UFC St Louis.

VanZant is currently sidelined due to an arm injury, but hopes to return to the Octagon this year.

If this fight happens, it would be the last obligation on VanZant’s current UFC contract. The 25-year old has spoken openly about her UFC contract in past weeks, and made a controversial comment stating that she gets paid more from social media posts than she does for her fights. When she finishes her next fight, she intends on testing her value as a free agent.

“I do think my value is significantly higher than what I’m currently valued at,” she said on Ariel Helwani’s MMA Show recently. “I want a significant pay raise, to be completely honest. I do think that my value is really low [right now].”

Justin Kish is not impressed by VanZant’s recent behaviour, but is aware that her popularity and recent comments could result in a lucrative match up. Would you like to see her go against Paige VanZant? Let us know your thoughts in the comments section.