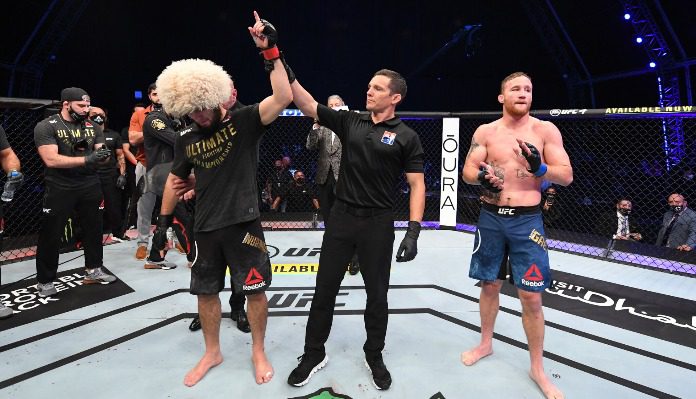 Justin Gaethje has revealed the critical error he made in his title fight with Khabib Nurmagomedov.

It was Gaethje (23-3 MMA) vs Nurmagomed (29-0 MMA) in the lightweight main event back in October of 2020 at UFC 254. The outcome was another check mark in the win column for Khabib.

This coming weekend, Saturday, May 7th we will see Gaethje back in action at UFC 274 as he once again attempts to obtain promotional gold. The main event title fight will see UFC lightweight champion Charles Oliveira get in the Octagon with Justin Gaethje.

Leading up to UFC 274, Gaethje reflected on his fight with Khabib, while speaking on the ‘UFC 274 Countdown’ video he said:

“I have to be perfect. The only time I’ve ever took another strategy, where I wasn’t moving forward, was against Khabib (Nurmagomedov) and I’ll never do that again. So, if he is moving forward, know then things aren’t going good for me.”

‘The Highlight’ is planning on sticking to the gameplan this weekend, challenging ‘Do Bronx’ for the title.

Speaking on the same video, ‘UFC 274 Countdown’, Oliveira had this to say about his upcoming opponent:

“Justin (Gaethje) is a guy who is a brawler, believing in his hands 100 per cent because that’s all he’s got, his hands. I have all the advantages over him, I’m better on my feet, on the ground and at wrestling. My mind and spirit is better than his. I’m the champion, that’s the reality.”

Charles Oliveira is very confident and not looking to part with his belt when he goes into battle with Justin Gaethje.

Oliveira is currently on a 10 fight winning streak, while Gaethje is coming off a win over Michael Chandler at UFC 268 back in November of 2021.

Will you be watching this Saturday? Who do you think will take the prize – Gaethje or Oliveira?