Justin Gaethje shared some high praise for Kamaru Usman after the welterweight champ successfully defended his title at UFC 258.

Usman (18-1 MMA) squared off with Gilbert Burns (19-4 MMA) in the headliner of yesterday’s pay-per-view event. ‘The Nigerian Nightmare’ was looking to earn his third career title defense, this after scoring recent wins over Jorge Masvidal and Colby Covington. 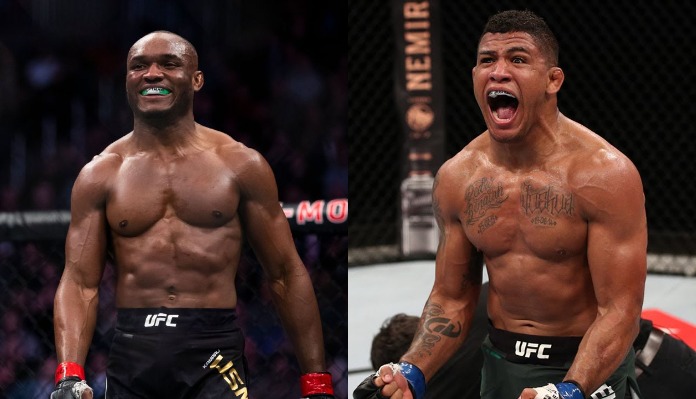 Although ‘Durinho’ was listed as the betting underdog by oddsmakers, he nearly played spoiler in the opening seconds of the fight after hurting Usman with a big right hand.

That momentary adversity did not sway the confidence of Usman’s training partner Justin Gaethje. After a tough opening round for ‘The Nigerian Nightmare’, the former interim lightweight title holder boldly predicted that Usman would bounce back to earn a finish.

@USMAN84kg finishes him in the next 3 I believe.

“Kamaru Usman finishes him in the next 3 I believe.” – Gaethje wrote at the end of round one.

Usman would go on to turn the tide as Gaethje predicted. The welterweight kingpin rocked Burns with a right hand in round two and promptly went on to finish ‘Durinho’ in round number three.

Following Kamaru Usman’s third consecutive title defense and seventeenth win in a row, Justin Gaethje took to Twitter where he sung the praises of ‘The Nigerian Nightmare’.

“You wish you could see us spar. @USMAN84kg only guy I train with that gets stronger as the round gets higher. Also a work ethic second to none.” – Gaethje wrote.

‘The Highlight’ has not competed since suffering a submission loss to reigning and undefeated lightweight champion Khabib Nurmagomedov at UFC 254. Prior to the setback, Justin Gaethje (22-3 MMA) had put together a four-fight win streak, with all four wins coming by way of stoppage. During that impressive stretch, Gaethje scored finishes over James Vick, Edson Barboza, Donald Cerrone and Tony Ferguson.

As for Kamaru Usman, the welterweight champion is now in talks for a rematch with Jorge Masvidal.