Meanwhile, Kamaru Usman (18-1 MMA) was returning the Octagon for the first time since scoring a unanimous decision win over the aforementioned Jorge Masvidal at UFC 251. ‘The Nigerian Nightmare’ had entered UFC 258 sporting a sixteen-fight winning streak, which included two successful defenses of the UFC’s welterweight title. 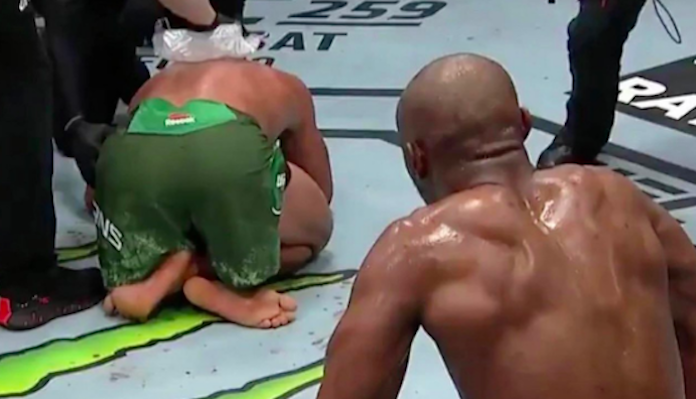 After a scary start to the fight, Kamaru Usman was able to turn the tide in his favor in round two and ultimately put Gilbert Burns away with punches in round three.

In his post-fight interview with UFC commentator Joe Rogan, Kamaru Usman proceeded to callout his former rival in Jorge Masvidal.

“We got this little street thug calling himself Jesus. He’s thinking he is Jesus. And you know Joe, we tried to make that fight several times. They tried to make that fight. But he kept backing out. The only reason this man took the (previous) fight is because it was on six days notice and he had a built in excuse.” Usman said of Masvidal. “And he is still running his mouth talking about he broke my nose and stepping in on six days. Give him three weeks and he is going to do something. Guess what? It’s not done. I will give you a whole training camp. I guarantee you won’t sign on that dotted line because this time I’m going to finish your ass.”

“Game plan to putting me in a “coffin” hug and toe stomp. Who is this guy fooling? He Nose #theresurrection” – Masvidal wrote.

Prior to those comments, ‘Gamebred’ had previously warned Usman what would happen if they were to rematch on a full fight camp.

“I took your nose on 6 days. 3 weeks I take the belt. Full camp I take your head. The Resurrection.” – Jorge Masvidal stated.