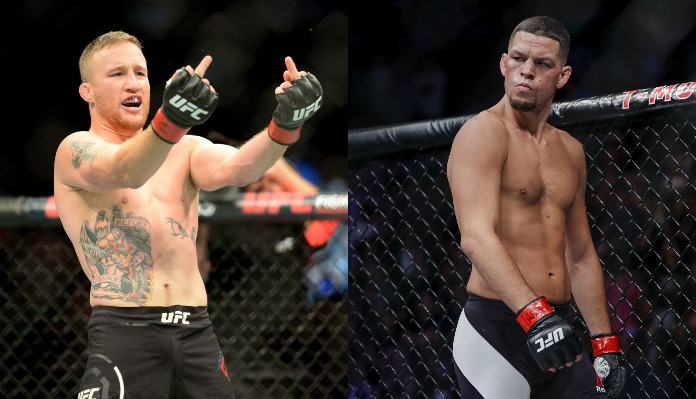 Justin Gaethje says he has not been offered Nate Diaz but would be open to the fight.

Recently, UFC president, Dana White revealed Diaz would be returning to lightweight and would fight a top contender. Many thought that would be Gaethje but he says he was not offered him and thought maybe Diaz can fight Diego Sanchez.

Yet, Gaethje knows Sanchez is for Conor McGregor so would take and beat up Diaz if it is offered.

“I’ll take the fight (with Nate Diaz). Diego Sanchez got his last fight coming up, that’s for Conor McGregor though,” Gaethje said to ESPN. “He wanted it last year, here’s your opportunity. That’s a great fight to make, get Diego someone money, he might whoop his ass because Conor is a b****h.

Gaethje is coming off the loss to Khabib Nurmagomedov. Before that, he had the fifth-round TKO win over Tony Ferguson after knocking out Donald Cerrone, Edson Barboza, and James Vick in the first round. He is the second-ranked lightweight contender so a Diaz fight doesn’t make the most sense, but perhaps it does come to fruition.

Nate Diaz, meanwhile, has not fought since he suffered a TKO doctor stoppage to Jorge Masvidal for the BMF title. Before that, he beat Anthony Pettis in his return to the sport after the back-to-back fights with Conor McGregor.

Although Diaz has been competing at welterweight there is no question a lightweight bout between him and Justin Gaethje would be a fun fight.

Would you like to see Justin Gaethje vs. Nate Diaz?