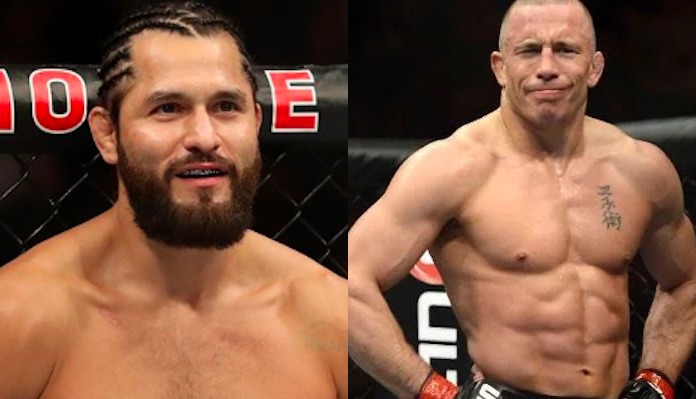 Jorge Masvidal is looking to get Georges St-Pierre out of retirement so he can fight him and “break his face”.

“Gamebred” has made it known he is after the biggest paydays possible and there is no doubt the former welterweight king in Georges St-Pierre would be a lucrative fight. Although Masvidal wants to break the Canadian’s face, he says he respects what “GSP” did in his career and knows how tough of a scrap it would be.

“Well, they’ve said this about me, that I resurrect fighters and then I retire them again,” Masvidal told Submission Radio (via TheBodyLockMMA). “So, I wouldn’t mind if GSP jumped on that campaign. In all honesty, as a competitor, I want to f*****g break his face. I want to go out there and give him everything I got.

“But I respect the time what he’s done. Then he took, I don’t know how many years off, came back, beat [Michael] Bisping for the legitimate middleweight title. Dude’s a stud,” he continued. “He’s a f*****g animal, bro. I would put everything into my being, into my soul, to end this individual, because he’s that good. He’s the type of fighter, this s**t would require a nice training camp, isolation away from the world and just focus on the task. Just day in and day out, cause he’s a hell of a competitor, and I’m not taking a back seat to nobody in this division. So, I would love it.”

Yet, it seems unlikely Georges St-Pierre would come out of retirement to fight Jorge Masvidal. St-Pierre retired from the sport after he could not get the Khabib Nurmagomedov fight he wanted. But, stranger things have happened in MMA and there is no doubt a scrap between Jorge Masvidal and GSP would be massive.

What do you make of Jorge Masvidal calling out Georges St-Pierre and who do you think would win the fight? Sound off in the comment section, PENN Nation!