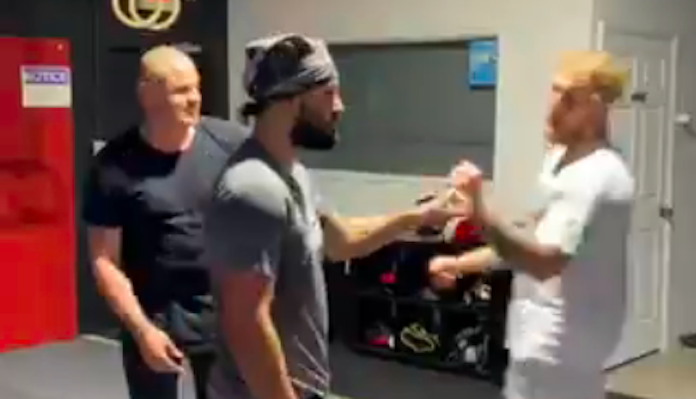 During a recent interview, Masvidal said he thinks Tyron Woodley would not only beat Paul but knock him out. It was interesting due to the fact Masvidal was training Paul ahead of the brash YouTuber’s fight against Ben Askren.

After Paul got word that Masvidal was picking Woodley he fired back at him and said “Gamebred” would eat his words quickly. He also says it’s a new era and says that Masvidal might be next when he beats Woodley.

“He’s going to eat those words very quickly,” Paul told MMAMania.com about Masvidal. “This is coming from a guy who just got knocked out cold in an embarrassing way… So yeah, maybe he doesn’t know that much about fighting. He’s been in this game for a long time. he’s got a lot of fights. he’s got a lot of experience. I respect him. I think Jorge has done a lot for this sport.

“I think he’s a good guy, but, unfortunately, my friend it’s a new era. No matter how much experience you have, it’s about the quality of the experience,” Paul continued about Masvidal. “Tyron and Jorge have the same manager, so of course, he’s going to say this. Of course, he’s going to side with his boy. But you know, maybe Jorge’s next, to be honest. After I take out this guy, he can step right up. I’m basically just showing these UFC champions and these amazing UFC strikers can’t really go at it and they can’t compete at my level, at least.”

To no surprise, Jorge Masvidal saw that and issued a subtweet about Jake Paul where he blasted the 24-year-old.

I guess this means you’ll stop hitting me up now on social media to hang out and train. Don’t worry about me you got a handful of problems coming your way #supernecessary

“I guess this means you’ll stop hitting me up now on social media to hang out and train. Don’t worry about me you got a handful of problems coming your way,” Masvidal tweeted.

This rivalry between Masvidal and Paul is one that kind of came out of nowhere as the two trained together and appeared to be friends. However, that is no longer the case as both men have taken shots at one another.

What do you make of Jorge Masvidal blasting Jake Paul?