Home » MMA News » UFC » Jorge Masvidal and Colby Covington get heated in a... 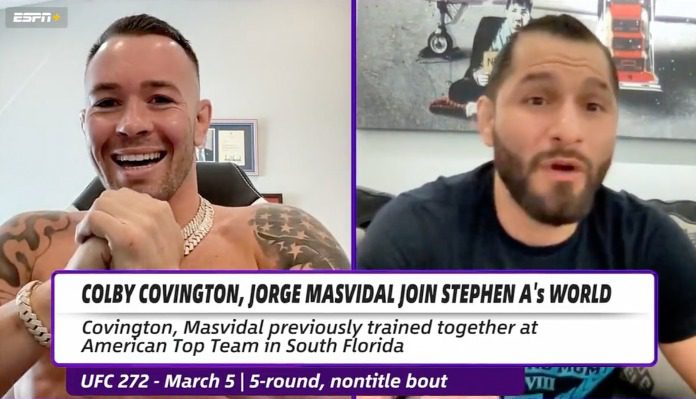 Jorge Masvidal and Colby Covington did a joint interview with Stephen A. Smith and to no surprise, it got heated.

Masvidal and Covington are set to headline UFC 272 on March 5 in Las Vegas. It’s a highly-anticipated bout due to them being former roommates and best friends but now hate one another. Part of the reason they started to not get along is due to the fact Covington allegedly didn’t pay a coach at American Top Team after his interim title fight win over Rafael dos Anjos.

Now, ahead of the fight, ESPN shared a promo clip of their join interview where the two got heated over the subject.

Jorge Masvidal: It first started out with this piece of s**t not paying my coach $12,500 for a fight that my coach coached him his whole f*****g career. Then when he had the chance to finally pay back the $12,500 he didn’t. So, I went out there and paid my coach out of my own pocket so since then it was like I’m going to f**k him up at some point. Look at him smiling, he can’t even keep a straight face yet everyone at American Top Team knows that’s why he got kicked out, soon to be kicked out of this gym because you don’t pay your bills, and your drowning in debt from all the loan sharks that you owe money in South Florida from poker. You know what is going to happen to you if you don’t pay that money. Keep smiling, little b***h I can’t wait to break those fake teeth. He ain’t got s**t to say, he’s a broke b***h.

Covington: It’s fake news, Stephen it’s fake news. Anything Jorge Masvidal says is a lie. You can’t believe anything he says, he’s all talk no walk. Yeah, he’s getting paid a lot of money like Dak Prescott for the Cowboys but he ain’t doing anything. He ain’t doing anything. Stephen A., you can ask his owner, his master Dan Lambert actually knows how much I got paid. That night I got that paycheck, I got paid half of what they said, the commission said I made doubled what they said, I got half that.”

This is just a snippet of the interview but there is no question fight week and the press conference will be heated between Masvidal and Covington.

Who do you think will win, Jorge Masvidal or Colby Covington?