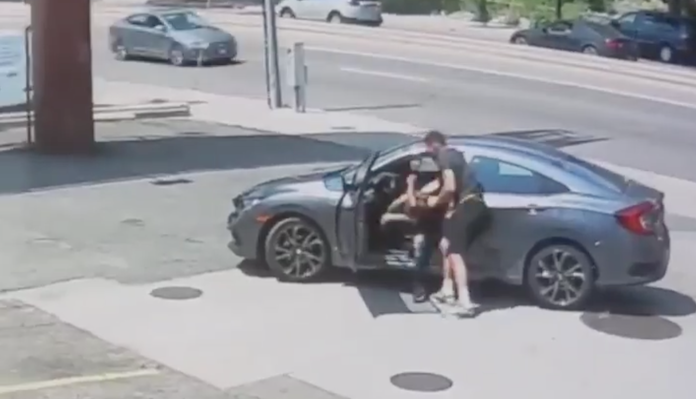 UFC welterweight Jordan Williams shared a video of him stopping a car thief from stealing his vehicle while he was wearing a fanny pack.

Williams most recently competed last month when he was submitted by Mickey Gall in his UFC welterweight debut. Prior to that, “Bomaye” lost a decision to Nassourdine Imavov in his UFC debut at middleweight. He previously competed three times on Dana White’s Contender Series, losing a split decision to Ramazan Kuramagomedov before returning to the show and picking up a big first-round knockout win over current UFC fighter Gregory Rodrigues. He also had a No Contest against Tim Caron on the second season of DWCS.

Just a few weeks after his fight against Gall, Williams took to his social media to post a video of him stopping a would-be car thief. Check out the video of the incident below.

So someone tried to steal my car today #thatfannypacktho If you are wondering why my car was still on its the same reason why he couldn’t drive away, I have a push to start and my car won’t go unless the keys are within 5 ft of it and I have them on me always. Needless to say my lesson was learned and I hope so was his. Wish I would of hit him with the trip after the clinch work when I tossed him out of the whip, and finish off with some ground and pound but I’ll settle with getting my car back Also I know you see the stillness of that fannypack, fannyback game was on point this could be a commercial for them

Williams (9-5, 1 NC) will be looking to rebound from his loss to Gall the next time he steps into the Octagon. Gall, by the way, replied to Williams’ video with a funny comment.

What do you think Jordan Williams should fight next after losing to Mickey Gall in his last UFC fight?