Stevie Ray announced his retirement from MMA in September 2020, which many thought was due to his knee injuries. However, there is much more to the story, which Ray has never spoken publicly about.

Ray competed in the UFC from 2015 and had a 7-4 record where in his last fight, he picked up what he calls the biggest win of his career as he defeated Michael Johnson. He also fought the likes of Paul Felder, and Leonardo Santos as well as defeating Joe Lauzon and Ross Pearson among others. Yet, for quite some time, Ray had heard rumblings the UFC wanted him out of the organization, and that finally happened when they released him, but he covered it up with him announcing his retirement.

“It was when the UFC decided to release me. It was a weird situation, I won my fight in Singapore against Michael Johnson and I signed a new four-fight deal with the UFC,” Ray revealed to BJPENN.com. “After that fight, I got matched up with Marc Diakese in March. Unfortunately, I had to pull out for the first time in my career due to a knee injury. I had the same injury against Johnson, but it was much worse this time. My manager at the time, Ali Abdelaziz phoned me and said, ‘Stevie, how would you feel about signing with another promotion if I can get you more money?’ I told him it depends on how much more money, like obviously I want to stay with the UFC but if it’s a lot more money, that changes things.

“I thought it was a strange phone call as I just re-signed with the UFC and won the biggest fight of my career. He basically then just said the UFC knows you have a knee injury and they want rid of you,” Ray continued. “I had then heard they wanted to get rid of me before the Johnson fight and they wanted me to lose so they could cut me, which is why they gave me that fight. Of course, I managed to win and after I won, they didn’t want to re-sign me right away as I was starting to be expensive. I made 40k and 40k against Johnson plus the 10k for Reebok so almost 100k a fight. After some time, I got the new contact.

“Then, later on, I got another phone call by Ali and he said ‘look, we have to sign somewhere else, they are not giving us a choice.’ The plan was to say I was a free agent and was looking at other options, if not, the UFC will say they are cutting you because of the knee problems. I was devastated,” Stevie Ray said. “Before they had released me, they wanted me to get my knee checked out. I went and did that and I got a heads up that they never expected me to get the clearance as that was an easy way for them to get rid of me. I see the doctor and he clears me to fight.

“Weeks go by and I get a fight on Fight Island against Mike Davis. I then got told to send them my visa details, which was strange and shady as Ali and the UFC knew I didn’t have a visa,” Ray concluded. “I had some legal problems when I was younger so it takes me a while to get my visa, so I had to turn the fight down. After that, I got told I was released from the UFC. A few weeks go by, I was depressed, and then I just said ‘f**k it, I’m done with this.’ I’m coming off the biggest win of my career and this is how it ends in the UFC.” 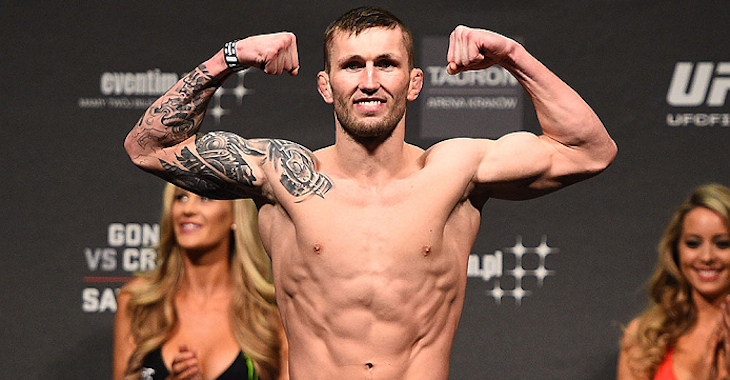 Shortly after getting the news of his release, Stevie Ray admits he went into a depression state. He then decided to retire, and the news never got out that he was released.

Although he was upset with how it all played out, Ray said he did message the UFC to say thanks for the opportunity. However, he still hopes he can meet face-to-face with them and work something out so he can fight inside the Octagon again.

“Ali told me to message Sean Shelby and say I’m thankful for the opportunity. Look, I am thankful for the opportunity, as much as I’m frustrated and upset. I’m over it now, but at the time, I was depressed. I had cried several times because it was the end of the chapter in the UFC and I felt like I was forced out and there was nothing I could do. I do hope we can mend fences or talk about it because I would jump at the chance to fight for them again. Unfortunately, I don’t think that will happen,” Ray concluded.

What do you make of Stevie Ray saying the UFC forced him to retire?