Jon Jones has issued a fiery response to Anthony Smith after his former foe claimed he failed every drug test during their fight week.

Jones and Smith fought at UFC 235 which was Bones’ first title defense since he reclaimed the belt at UFC 232. Smith, meanwhile, entered the fight undefeated at light heavyweight but throughout the bout, Jones dominated it and won a clear-cut decision aside from throwing an illegal knee and being deducted two points.

“He does this well, he does that well, he was suspended for this, but I never get into his drug test bullsh*t,” Anthony Smith said on The Jenna Ben Show. “I never even told anyone Jon failed every drug test the entire week leading up to our fight. Every single drug test. I never brought it up one time in any interview, in any media thing, nothing. The commission called me every day to let me know he was still failing his drug tests. I never said anything, I let it be because I was just focused on myself and always believed that if you just focus on yourself you’re going to be that much more successful.”

Although there is no proof of that, Jones took to social media to blast Smith for making it up. However, he seemed to more have a laugh at it. 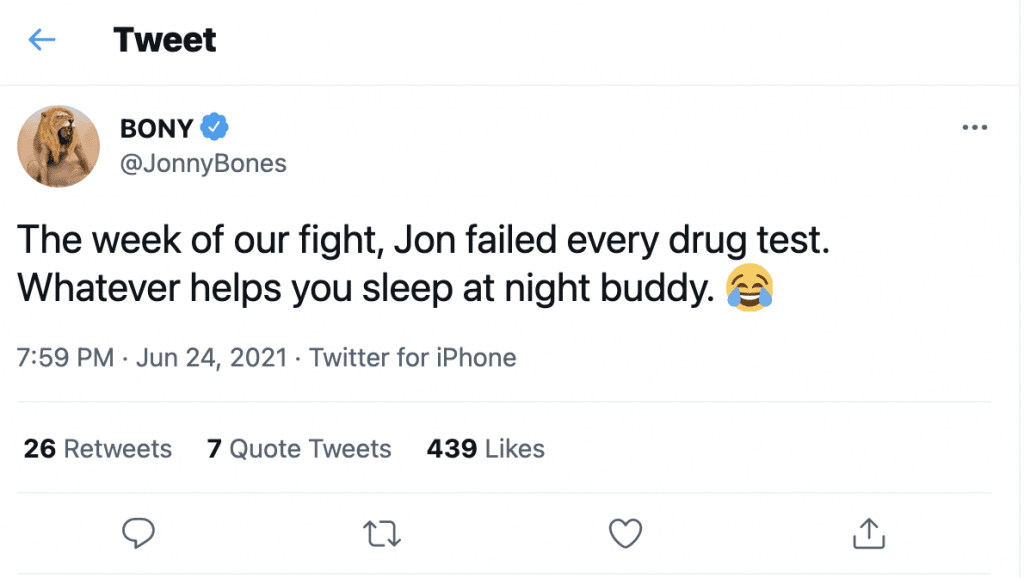 “The week of our fight, Jon failed every drug test. Whatever helps you sleep at night buddy,” Jones wrote on social media.

As of right now, Jon Jones does not have his next fight booked. He’s been bulking up for a heavyweight move but he hasn’t been able to reach deal with the promotion.

What do you make of Jon Jones’ response to Anthony Smith?