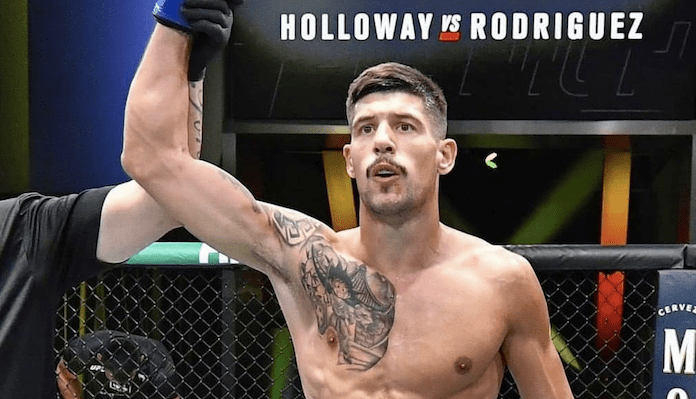 An intriguing matchup between top-15 ranked lightweight Joel Alvarez and Arman Tsarukyan has been added to an upcoming UFC Fight Night card.

TASS report Igor Lazorin was the first to report that Alvarez vs. Tsarukyan will take place on a UFC Fight Night card set for February 26th. The event is set to be headlined by a five-round lightweight bout featuring top contenders Islam Makhachev and Beneil Dariush, so this Fight Night card features four of the top-15 ranked lightweights in the world on it.

Alvarez (19-2) is the No. 15 ranked lightweight in the UFC. The 28-year-old Spaniard is 4-1 overall in the UFC and he is currently riding a four-fight win streak with all four of his victories coming by stoppage. In fact, in his MMA career, Alvarez has finished all 19 of his career victories, including a knockout over Thiago Moises in his last fight. The problem with Alvarez is that he has a problem making the lightweight limit of 155lbs, having missed weight in both of his past two fights. The UFC is giving him one more chance to make the weight and he will reportedly be working with the Performance Institute in order to do so.

Tsarukyan (17-2) is the No. 13 ranked lightweight in the UFC. The 25-year-old Armenian-Russian is 4-1 overall in the UFC — the same record as Alvarez — and he has also won his last four fights. In his last outing, Tsarukyan knocked out Christos Giagos in what was one of his most impressive performances ever. Overall, Tsarukyan has looked incredible in the UFC and he is absolutely closing in on the top-10 of the lightweight division. If he can go out there and defeat Alvarez, it would certainly earn Tsarukyan a step up in competition.

Who do you think wins this lightweight bout between Joel Alvarez and Arman Tsarukyan?