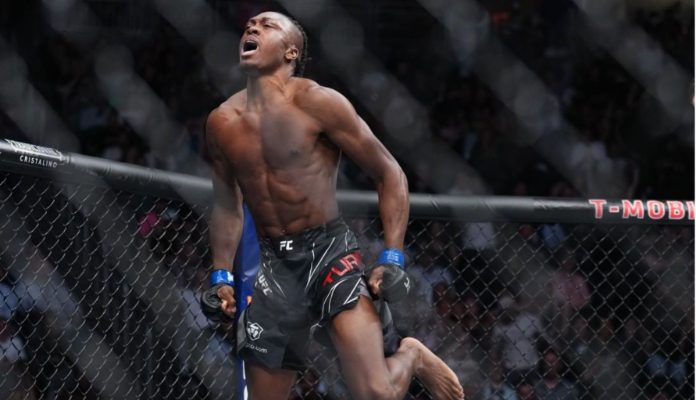 Jalin Turner believes UFC 276 was a breakout performance for himself.

Turner was set to fight his first-ranked opponent as he was taking on Brad Riddell in the prelim headliner at UFC 276. Entering the scrap, Turner knew Riddell would be a tough test but he rocked the Aussie early and then hopped on a choke and got the tap just 45-seconds in.

Although Turner expected to get the stoppage win, he says he was surprised he got Riddell out that early.

“Hell yeah, I was surprised it happened that quickly. I was mentally preparing for him at his best and his toughest and to bring the fire but guess I was the fire extinguisher… After I landed the right hand I saw him stumble a little bit but I knew he was durable,” Turner said to BJPENN.com. “But, when he came in, I threw a huge body shot to the liver for extra insurance that he wasn’t going to be able to recover quickly. Then, as soon as I sunk in the choke I knew had a bit more time to work. The choke was pretty tight but I did have to make a few adjustments to really get it right before he tapped.”

With the win, Turner is now ranked 14th at lightweight and he believes his UFC 276 win was a statement-making one. Although he has been in the UFC since 2018, he feels like he’s finally hitting his stride and coming into his own.

“I feel like I’m on a new level, I’m coming into my own and hitting my stride. I’m just growing up, mentally and physically, and always adapt to my situation,” Turner said. “I’m here and I want to get to the top so I need to perform and go out there and always get the finish.”

Even though Turner is now ranked and didn’t take much damage, he isn’t sure when he will return. Instead, he says he will leave that up to his management but hopes he can get one more in this year.

“I might return this year, I did say I want to take some time off, so maybe early next year. It really all depends on who they give me, dates, and locations it is chess now so I have to move strategically,” Turner said. “Honestly, I don’t care who is next, I will fight someone unranked next, if it’s up the ranks, below me, I’m just here to fight.”