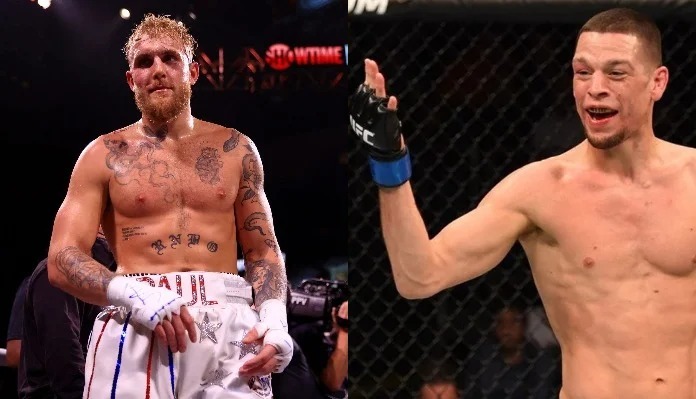 YouTuber-turned-boxer Jake Paul has revealed that he’ll be betting on Nate Diaz to defeat Khamzat Chimaev at UFC 279.

Earlier this week, it was revealed that Nate Diaz will be fighting out his UFC contract when he locks horns with Khamzat Chimaev at UFC 279 on September 10. It’s a contest that has been heavily rumoured for a few months now and despite the opposition to the idea from many fans, the promotion is pushing ahead with it.

The Stockton king last battled Leon Edwards at UFC 263 and ever since then, he’s been on the hunt for one more fight before riding off into the sunset to try out something new.

Jake Paul, who could be a future opponent for Diaz inside the boxing ring, is actually backing the 37-year-old to get the job done against ‘Borz’.

Paul has spent a lot of time calling Diaz out and making it known that he wants to battle him in the boxing ring, but in this instance, he certainly seems to respect what he’s been able to bring to the table in MMA ever since debuting in the UFC.

Diaz has also been in a long-term feud with UFC president Dana White which, as we all know, is an area ‘The Problem Child’ is quite familiar with after continually calling for better fighter pay.

There’s a good chance Khamzat is going to run through Diaz in September but even if he does, you can bet Jake vs Nate would still be a blockbuster fight.

What do you think about Jake Paul’s prediction for Nate Diaz vs Khamzat Chimaev? Can you see Diaz pulling off the upset before leaving the UFC? Let us know your thoughts down in the comments, BJPENN Nation!