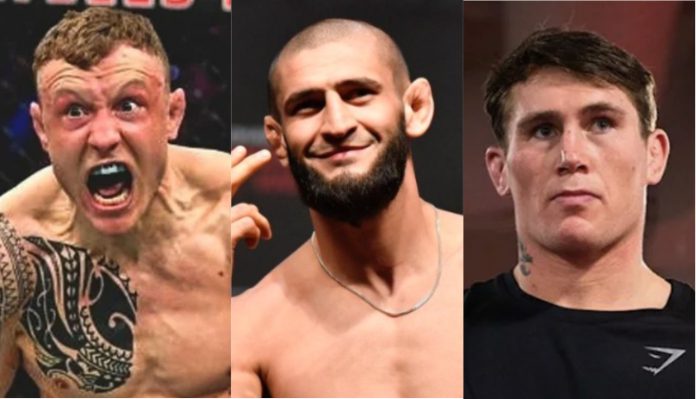 Fans were a bit perplexed to see Khamzat Chimaev training alongside Jack Hermansson as the Swede prepares to fight Darren Till.

Hermansson (22-7 MMA) and Till (18-4-1 MMA) are set to collide in a middleweight bout on July 23 at UFC London. It is a pivotal contest that sees both fighters looking to rebound from recent losses.

Jack Hermanson last competed in February of this year, suffering a split decision loss to Sean Strickland. That setback was preceded by a unanimous decision victory over Edmen Shahbazyan in May of 2021.

As for Darren Till, ‘The Gorilla’ will enter the contest looking to snap a two-fight losing skid. The Liverpool native has lost four of his past five fights overall, with his lone win in that time coming against Kelvin Gastelum by split decision..

Given that Till trained and cornered Khamzat Chimaev for his recent fight with Gilbert Burns at UFC 273, most fans expected ‘Borz’ would return the favor for Darren’s upcoming bout at UFC London.

However, to the surprise of many, Chimaev was recently seen training with Till’s upcoming opponent Jack Hermansson.

‘The Joker’ shared a photo of himself training with ‘The Wolf’ on Instagram:

“Getting some rounds in with the Wolf!” – Hermansson captioned the post.

Khamzat Chimaev later commented on Jack’s post with some emojis before sharing some photos of his own while announcing that he’s in training camp.

With there only being a couple of quality MMA gyms in Sweden, it is usually not surprising to see Chimaev and Hermansson training together.

However, given that Jack’s upcoming fight is against Khamzat Chimaev’s fellow “smesh bros” in Darren Till, the pairing does seem a little odd this time around.

What do you think of Chimaev training with Hermansson ahead of his UFC London fight with Darren Till? Share your thoughts in the comment section below.