Jacare Souza is no longer a member of the UFC roster.

At UFC 262, Souza was fighting fellow Brazilian grappling ace, Andre Muniz. The bout also served as Souza’s final fight on his contract where he suffered a submission loss. According to ESPN, the former Strikeforce champ is now a free agent.

Souza’s manager Andre Pederneiras confirmed the news to ESPN saying they don’t know what the fighting future of Souza is.

“Jacare just wants to take a rest now and take care of his family for now,” Pederneiras said.

In the fight against Muniz, Souza was taken down a couple of times and then Muniz got ahold of his arm in an armbar and ended up breaking it. The injury forced him to have surgery which went well. Even prior to the surgery, the Brazilian was in good spirits. 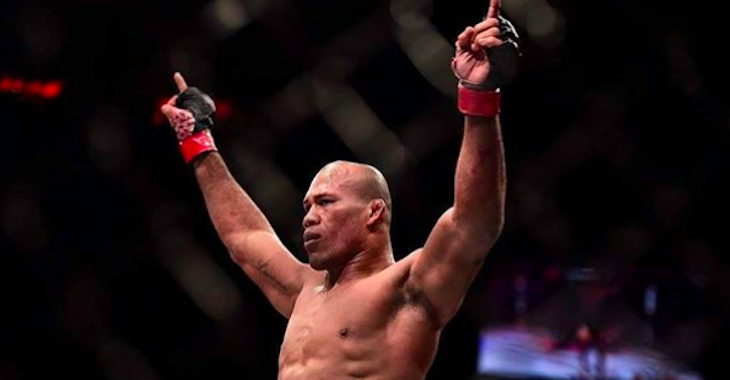 “Hey what’s up, everybody? I’m at the hospital right now. I broke my arm and I have my surgery tomorrow. Thanks, UFC for all the support, and thanks to everyone for rooting for me. I think everything’s going to be fine, thank you,” Souza said in the statement.

Jacare Souza is now 41-years-old and on a four-fight winning streak. Prior to his submission loss to Muniz, he suffered a KO loss to Kevin Holland and back-to-back decision setbacks to Jan Blachowicz in his UFC light heavyweight debut and Jack Hermansson.

If this is the end of the road for Souza, he goes down as one of the best fighters to never fight for the UFC title. He is the former Strikeforce champ and had a ton of success in the UFC. In his tenure with the Las Vegas-based promotion, he beat the likes of Chris Weidman, Derek Brunson, Vitor Belfort, and Gegard Mousasi. However, setbacks to Yoel Romero at UFC 194 and Robert Whittaker in 2017 kept him from fighting for the belt.

Are you surprised that Jacare Souza is no longer a member of the UFC roster?