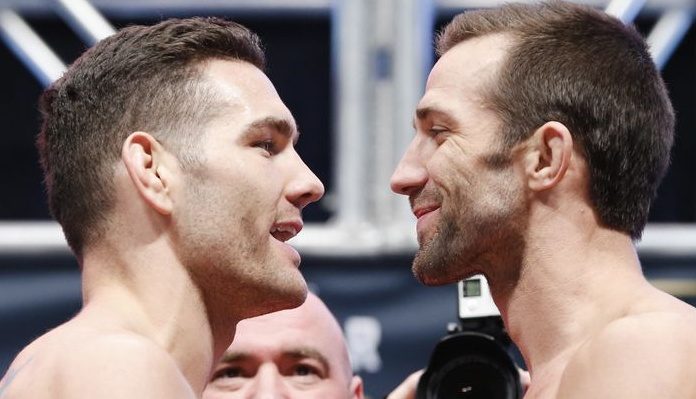 Rockhold (16-5 MMA) and Weidman (15-6 MMA) have had a long standing rivalry ever since ‘Rocky’ dethroned the ‘All American’ in brutal fashion back at UFC 194.

With that said, Luke Rockhold’s recent comments in a interview with ‘The Schmo‘ regarding Weidman’s injury should not come as too much of a shock.

“I broke [my shin] first kick of the fight, but somehow it didn’t break.” — Luke Rockhold pic.twitter.com/5giJ5AoTQ3

“You know I wish him all the best,” Rockhold said when asked if he had any words of encouragement for Weidman. “You know, that’s a tough one. I don’t know what it is like to have those little feminine shins, you know? I don’t know. Because I broke mine first kick of the fight. But, it somehow didn’t break.”

Luke Rockhold, who has not competed since suffering a knockout loss to Jan Blachowicz in July of 2019, announced his intentions of making a UFC comeback early last fall.

However, over the last nine months nothing has been announced by the promotion. According to Rockhold, the holdup is due to the fact that no one in the top 10 of the UFC middleweight division is willing to throw down.

“It’s really about fighting someone who’s going to fight,” he said. “I need to find a top 10 guy who’s willing to sack up and ready to fight. There’s already multiple people in the top 10 making excuses for why they won’t fight me. It’s like who the f—k are you to turn down the fight? Where’s your entitlement in what you think you have? My last fight [at middleweight] was against Yoel Romero, who missed weight for a world title in Perth two years ago. So I’ve left the rankings but I’ve not really left the rankings. I’m still there just as much as I want to be. And everyone knows who I am and what I can do and I think everyone is just making excuses for why they won’t fight me right now.”

What do you think of Luke Rockhold suggesting that Chris Weidman’s leg break was due to feminine shins? Share your thoughts in the comment section PENN Nation!