It will be Anderson Silva vs Jake Paul this coming Saturday night, October 29th at the Desert Diamond Arena in Glendale, Arizona.

‘The Problem Child’, 25, is sporting 5 concurrent wins, 4 of which are by knockout.

Anderson Silva, 47, steps into the boxing ring aiming to hand Paul his first professional boxing loss. Some believe if there’s anyone capable of upsetting Paul it is the MMA icon Anderson Silva.

In speaking on ‘BS w/Jake Paul’, Adesanya shared his thoughts on the upcoming match between Paul and Silva (h/t MMAFighting):

“I’m gonna be honest, he’s a tough fight, but I said this to you at your house after your Nate Robinson fight and I was just like, ‘Man, you’re a crazy motherf***er.  And I still maintain that. You’re a crazy motherf***er. So, you even getting this fight happening it’s something that is gonna go down in history and you can get it done. Silva can be beat. This is boxing as well, it’s not MMA, he is getting older, I don’t really think that plays a factor as everyone is saying. Don’t f***ing believe the hype just cause he’s 42 or whatever. He’s a different kind of 42-year-old.”

“I think you can get it done, but do not f***ing sleep on Silva (otherwise) it’s gonna be a bad night. I wanna see you shake up the world, it’s fun to see you just throw your s**t everywhere (laughs).” 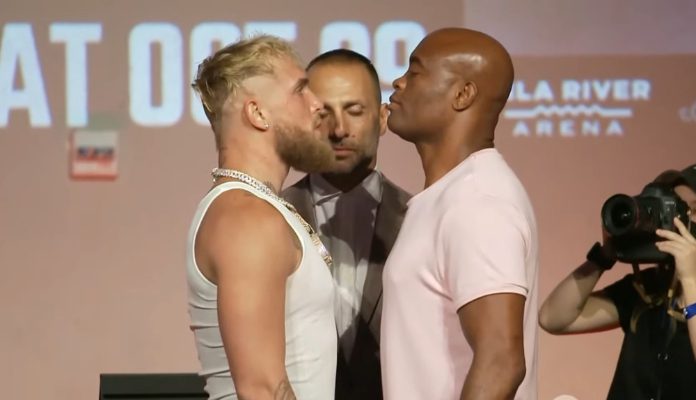 “You gotta be careful, man. I told Logan (Paul), if you take this fight, take it seriously because he’s no joke. Silva is the master, he’s a mastermind, man. It comes to the level of even the way he talks, the way he speaks to you when you meet him. He’s a friendly guy, I love Silva. He’s cool and he’s a humble, genuine dude as well. But when it comes to war, he’s a savage.”

Adesanya (23-1 MMA) has a history with Anderson Silva (34-11 MMA) as the two met back in February of 2019 at UFC 234 resulting in ‘The Last Stylebender‘ winning via unanimous decision.

Will you be watching Paul vs Silva this Saturday? Who are you putting your money on?

This article appeared first on BJPENN.COM
Previous articleDaniel Cormier explains why Henry Cejudo should get next UFC bantamweight title shot over Sean O’Malley: “For the sport, Henry Cejudo, as the guy who left as a double champion should be next”
Next articleHasbulla vows if he ever meets Conor McGregor he “will cause some problems for him”
© Newspaper WordPress Theme by TagDiv