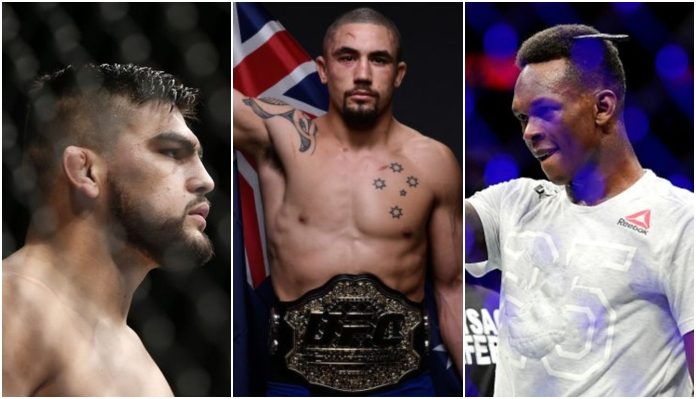 During an appearance on Ariel Helwani’s MMA Show, Israel Adesanya made a bold prediction for a potential fight between Robert Whittaker and Kelvin Gastelum.

Adesanya, of course, is well acquainted with both men.

In his bout prior, the Nigerian-born fighter collided with middleweight contender Kevin Gastelum in the co-main event of UFC 236. Both fighters delivered a valiant performance and the back-and-forth battle proved the fighting skillset of both fighters. However Adesanya ultimately earned a unanimous decision win.

Having fought both men, he believes he knows who would come out on top if they won.

On #HelwaniShow, @stylebender to @arielhelwani on if Kelvin Gastelum faces Robert Whittaker: "I think Kelvin dusts him"

Gastelum has posed a great threat to middleweight contenders in his most recent fights. However, he may have underestimated his opponent in his last fight at UFC 244. His rival, Darren Till found his range early and utilized the clinch to take away Gastelum’s weapons. The fight was a close call, but the British fighter ultimately beat Gastelum by split decision.

Robert Whittaker was impressed with Till’s performance and praised him online:

“Till was landing a lot of clean shots,” Whittaker said. “I think that he was nullifying a lot of Gastelum’s striking, because he was stepping out on the jab, dropping his level on the two, and then turning it into the clinch. I think it was beautiful. I think Till came in with a great gameplan, I think he executed it perfectly, cause Gastelum is a super underrated, super, super dangerous fighter.”

With no next fight lined up for either Gastelum and Robert Whittaker, would you like to see them fight and put this prediction from Israel Adesanya to the test? Let us know in the comments below!