Henry Cejudo was not exactly receptive to the well wishes he received from Conor McGregor on “World Champ Champ Day”.

Yesterday, November 12, had marked the four year anniversary of McGregor’s destruction of Eddie Alvarez. The historic win at UFC 205 in New York made Conor McGregor the first “champ champ” in promotional history.

The UFC had bolstered previous two division champions in the form of BJ Penn and Randy Couture, but neither of those men had held multiple belts at the same time. 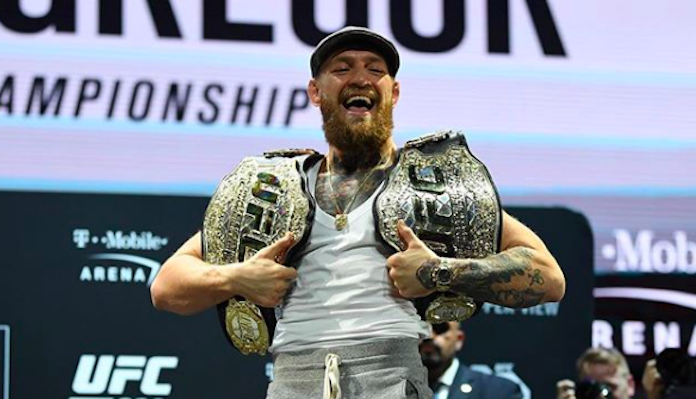 The Irishman gave a shoutout to all three of those fighters yesterday evening acknowledging their respective achievements.

While McGregor’s tweet appeared to be genuine, former UFC flyweight and bantamweight champion Henry Cejudo was not impressed.

‘Triple C’ took to Twitter where he issued the following response to the Irish superstar.

“Hey Conor McGregor why don’t you wish me a happy Triple champ day on Jun 8. You guys have fun with this average day. This is just a normal day for me. #bendtheknee”

Henry Cejudo (16-2 MMA) shocked the mixed martial arts world this past May when he announced his retirement from the sport immediately following his TKO win over Dominick Cruz.

Since retiring, ‘Triple C’ has flirted with the idea of returning to the Octagon for a super-fight with reigning featherweight kingpin Alex Volkanovski. With that said, UFC President Dana White has been reluctant to entertain the idea.

Meanwhile, Conor McGregor has not stepped foot inside the Octagon since taking less than a minute to destroy Donald Cerrone this past January at UFC 246.