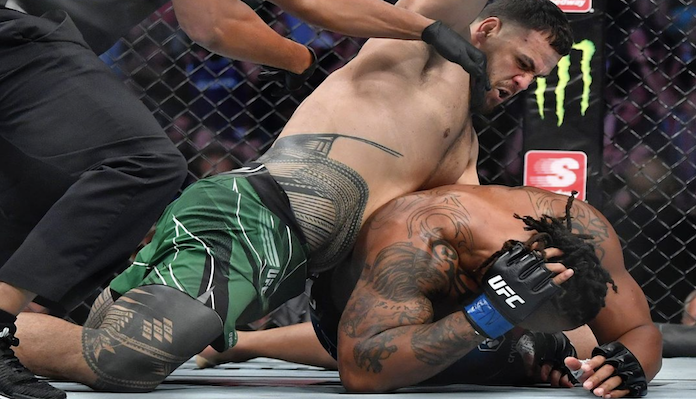 Greg Hardy claims that Tai Tuivasa “cowered out of the brawl” in their previous fight at July’s UFC 264 event in Las Vegas.

Hardy (7-4 MMA) and Tuivasa (13-3 MMA) collided on the main card of last summer’s ‘Poirier vs. McGregor 3’ event, with ‘Bam Bam’ emerging victorious by way of first round knockout (see that here).

Although their fight only last 67-seconds, both Greg Hardy and Tai Tuivasa were able to get off big shots. ‘The Prince of War’ actually had the Aussie badly rocked, but ‘Bam Bam’ stormed back to earn the knockout finish.

During a recent appearance on Combat Sports on Fanatics View, Greg Hardy shared the following interesting remarks on his loss to Tai Tuivasa.

“I made a mistake and me being the guy I am, I owned up to my mistake. Losses are losses. He won so kudos to you bro. He gets on there and he’s like, ‘I’m not a woman, I beat him down, it was an easy fight’. That’s not realistic, buddy. You hype me up. I got caught up in the hype, of course, I should have never tried to meet him in the middle and I should have fought my fight.” Greg Hardy said. “But he cowered out of the brawl that we agreed upon and started throwing, you know, little girl haymakers from the back. And then luckily, lands one because I idiotically just stood up and didn’t know where I was. I didn’t get punched, I didn’t get rocked, I just stood up on some stupid crap. Some young man stuff. I hate that kind of stuff. I call it what it is. You won, take your win. Don’t hype it up like you came in and killed me because you got exposed a little bit. He’s got a weak chin.”

Hardy was slated to compete in the final fight of his current contract at tonight’s UFC Vegas 46 event. However, a last minute finger injury forced the former NFL star to withdraw from the event.

As for Tai Tuivasa, ‘Bam Bam’ is currently boasting a four-fight winning streak with all of those victories coming by way of knockout. The Aussie is slated to meet former heavyweight title challenger Derrick Lewis in his next appearance at UFC 271 in Houston.

What do you think of the comments made by Greg Hardy regarding his previous fight with Tai Tuivasa? Share your thoughts in the comment section PENN Nation!