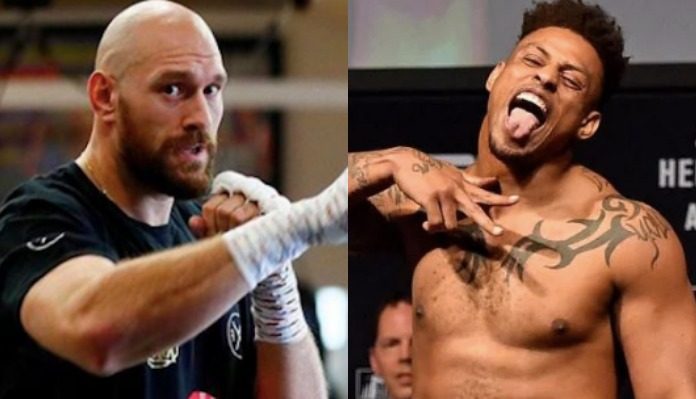 Lineal heavyweight boxing champion Tyson Fury has recently expressed interest in a potential move to MMA, and he’s already getting called out by notable MMA heavyweights. The latest fighter to call him out is former NFL player Greg Hardy.

Hardy called Fury out shortly after the boxer was targeted by a top heavyweight in Francis Ngannou.

A post shared by Greg “The Prince Of War” Hardy (@greghardyjr)

“The good news is @gypsyking101 I am gonna come to the 10oz world very soon my friend. So with all do respect (shout out Ricky Bobby) if you have the stones to take a whooping in the ring and octagon. The most Active heavyweight in the UFC will oblige. #imyourhuckleberry The Gypsy King Vs The King of War 2021” – Greg Hardy on Instagram.

In this callout, Hardy hints that he’s plotting a move to the boxing ring, but also seemingly welcomes an MMA match with Fury. Whatever the case, it’ll be interesting to see how Fury responds — or if he responds at all.

Greg Hardy, who was blackballed from the NFL after a domestic violence scandal, has fought seven times professionally. His last four wins have occured in the UFC’s Octagon. In his debut, he was disqualified for smashing Allen Crowder with an illegal knee. He then rebounded with lopsided beatings of Dmitry Smoliakov and Juan Adams, and most recently fought Ben Sosoli in a fight that was ruled a no-contest due to his use of an inhaler between rounds.

He’s set to return to the cage in a matter of days, as he’s stepped up to battle top-10 contender and former Bellator champion Alexander Volkov on short-notice in the co-main event of UFC Moscow.

What do you think of his callout of Tyson Fury?