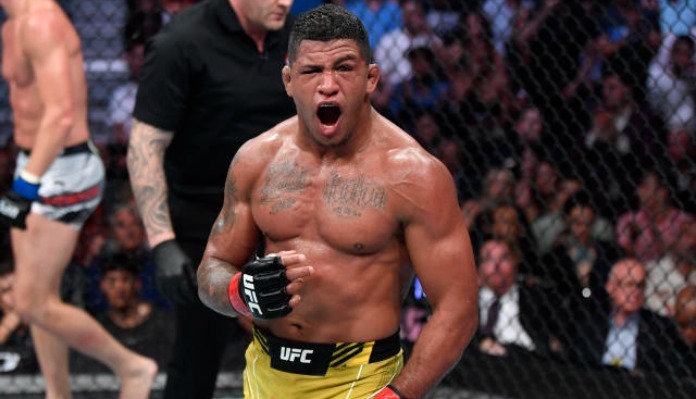 ‘The Notorious’ has been out of action since his loss to Dustin Poirier at UFC 264 last July. In that trilogy outing, McGregor broke his leg in the final seconds of round one. Due to the injury, he’s been on the sidelines for over a year.

However, the former dual-weight champion is now back in training according to John Kavanagh. Furthermore, he’s also targeting a move up in weight as well. Earlier this year, McGregor called for a welterweight title fight against Kamaru Usman.

Former welterweight title challenger, Gilbert Burns doesn’t believe that’s a wise callout. Furthermore, the Brazilian believes that Conor McGregor should think twice about a weight move in general. The 36-year-old discussed the possible move in an interview with MMAFighting.

There, ‘Durinho’ downplayed the Irishman’s chances at welterweight. It’s worth noting that McGregor has fought at the weight class before on three occasions. The former champion has gone 2-1 at 170-pounds, with wins over Nate Diaz and Donald Cerrone.

Despite the wins, Gilbert Burns believes Conor McGregor should stay at lightweight.

“He’s not a welterweight but if he wants to fight at welterweight, I’d love to beat the s*** out of Conor. I think he’s not going to take that punch. I’m not even talking about grappling cause that’s not fair. [I’d] just take him down and maul him but a fight with Conor, it’s a win-win for me. I’m going to beat him up and I’m going to get a ton of crazy money, I’m not even calling for that fight cause it’s not fair. I think he’s a 55-pounder, [if] he’s at 170, he can’t take those punches. He cannot handle that wrestling.” (h/t MMAFighting)

Gilbert Burns continued, “You can’t handle the top five guys in that division. You can fight a couple of guys at 170 but he’s not a welterweight. If he really thinks [he is], try some top five [fighters] in that division. I think it’s not fair. We’d just destroy Conor.”

What do you think about Gilbert Burns’s comments? Sound off in the comment section below!